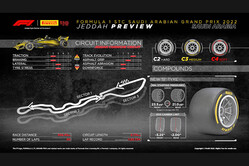 Less than four months after its first visit, Formula 1 is back in Saudi Arabia. Pirelli has once more chosen the compounds in the middle of the range: C2 as the P Zero White hard, C3 as the P Zero Yellow medium, and C4 as the P Zero Red soft. This time though, it's with the new family of Formula 1 cars and tyres, as the teams get their first taste of the C4 compound in competition this year - with the hardest three compounds nominated for the opening round in Bahrain a week ago.

This choice has been made as a result of Jeddah's track characteristics (both in terms of layout and asphalt), the expected temperatures, as well as the data collected from the debut race in 2021. The new surface from last year offers a good level of grip (scoring three out of five in Pirelli's classification) and reasonably contained levels of asphalt abrasion (scoring two out of five in Pirelli's classification), which should lead to moderate wear and degradation. The severity of the loads and speeds is average, with overall tyre stress scoring three out of five. Due to the rapidly flowing layout, the track is not particularly demanding in terms of traction and braking (scoring two out of five in Pirelli's classification). A high degree of track evolution over the weekend is expected, thanks also to the Formula 2 support race programme.

The fastest street circuit on the F1 calendar has changed a bit since making its debut on the calendar last year, as the result of modifications requested by the governing body following a few on-track incidents last time. These largely consist of opening up sight lines through corners by moving barriers further back, while the final turn (Turn 27) has been widened by the removal of a grandstand, which could make the lap slightly faster. Turn 13 (of 27) still features 12 degrees of banking, helping the rapid flow of the circuit that makes it the second-quickest lap of the year overall, after Monza.

The 50-lap Saudi Arabian Grand Prix is the second consecutive night race on the calendar, which means that track temperatures can differ between the sessions - as was the case in Bahrain - with FP2 and qualifying more representative of race conditions.

Mario Isola: "Jeddah marks a completely different challenge compared to the opening grand prix in Bahrain due to the diverse track characteristics, both in terms of layout and asphalt. Driver will also use a softer range of compounds this weekend to cope with the specific demands of the track, which is nearly as quick as Monza. The teams head into Jeddah with no experience of these tyres and cars on the circuit, and conditions could be somewhat different from last time in Saudi Arabia, with the race now being held at a different time of year and a few track modifications in store.

"The nominated compounds are the same as 2021, but their make-up has also changed entirely from last year. As a result, the teams will have a lot of work to do to assimilate as much data as possible during free practice, especially in FP2 which will be the only relevant session, being held at the same time as qualifying and the race."