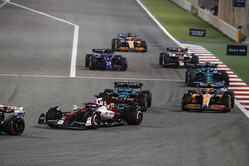 Following a difficult start to the season, Lando Norris feels McLaren are going to face a lot of pain before things start improving.

While some still insisted that certain teams were sandbagging in pre-season testing, from the moment the cars hit the track on Friday it was clear that they were not.

Though improvements had been made, it was clear that some teams still had issues.

Having suffered various issues, most notably brake cooling, McLaren expected to start the season on the back foot, but surely nothing could have prepared the Woking outfit for the reality.

Neither made it into Q3 on Saturday, Ricciardo not even making it into Q2, while come the chequered flag the papaya cars were running 14th and 15th.

Adding insult to injury, last season's no-hopers, Haas and Alfa were both in the points, the Italian team doing it with both of its cars.

Echoing Max Verstappen and Christian Horner, team boss Andreas Seidl described his team's race as "disappointing and painful", his only comfort being that the MCL36 had finally completed a race distance.

However, it is clear the team's issues will not be a quick fix.

"I'm expecting pain," admitted Norris, "and I think everyone needs to know there's probably going to be a bit of pain.

"As McLaren, and myself, we expect a lot more," he continued, "but it's not what we have at the minute, we have to get used to it.

"We've been in this position a few years ago," he added, "but we have to remain optimistic that the team and everyone back at MTC can figure things out and we can get back on track.

"I'm hoping this is as bad as it gets... might not be... could be, there's a lot of time... we still have a whole season of development and figuring things out.

"Of course, difficult," he admitted. "I'm sure it looked as bad as it felt. This is where we are, quite simply, we just have to get a little bit used to it now.

"Of course over the last few seasons there's been a lot of expectation from us within the team but also everyone else watching and we just haven't got it right at the minute. We're a long, long way off, not a little bit, a long way."

"It's hard to really know coming into the start of the season, with a new era, what to expect," added teammate Ricciardo. "You can hope that things will be good but it's obviously a slow start for us. But I believe there's only one way up from here and that's forwards.

"Obviously starting from pretty much the back we knew it wouldn't be an easy race, and we had some challenges," he continued. "But I'm glad we got the race distance in, especially for me, it's really the first race distance I've done.

"So just to learn the car more, feedback to the team, I tried every compound as well during the race, just some interesting things to feel and also some places where I thought the car was good.

"Overall, obviously we still have a few more weaknesses than strengths, so I'll just try and give that info to the team and try to assist them as much as possible now. That's all we can do.

"We'd love to be up on the podium, but we're obviously a long way from that. But the only way to improve is to work together and address as much as we can in the most efficient way possible."