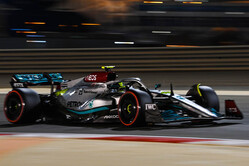 Lewis will start the Bahrain Grand Prix from P5 and George P9 after an intense opening qualifying session of the 2022 F1 season. The team look to be the third-quickest on pace, having made improvements from pre-season testing.

Lewis Hamilton: The session was tough but I'm really proud of what we've managed to do, given the issues we've had the past week. Those guys ahead of us are on another level at the moment but there's a lot to play for tomorrow at the start and with strategy so I hope I can at least stay with them and stay in the fight. We're not quick enough to win but I told you that before the weekend. It was looking like we were further behind last week, we've made some improvements and we're closer, so I'm proud of what we've achieved and where we've got to. I hope we'll make another step next week and bit by bit, we'll hunt those guys down. The improvements come from our collective efforts, we're working as hard as we can and I know it's a long, long way to go but I love a challenge.

George Russell: Today wasn't ideal for me, I went one second slower in Q3 than I did in Q2; with only one set of fresh tyres for Q3, I tried something different on my out-lap and it didn't work. I'm glad I tried something because we want to be fighting Ferrari and Red Bull. We had one shot, maybe it was too risky but we're here to fight for podiums and victories, not to settle for P5 and P6. The pace of our car is definitely behind Ferrari and Red Bull, and ahead of the rest of the midfield, so my target for tomorrow is to get ahead of that group. We're trying absolutely everything at the moment to solve our global issues with the car. We all knew with the regulation change that anything could happen, the only promising thing is we have major issues and we're still the third-fastest team. If we were in this position and everything felt great, then we'd be a little bit puzzled. It race day tomorrow and I'll be giving it my all.

Toto Wolff: We have to be realistic about our performance level at the moment and that is the third quickest team on the grid. Lewis put the car there and for George, it was probably us misguiding him in his last outing because we advised him to push the outlap stronger and he had no edge anymore with the new tyre. It's very difficult to make a judgement on PU performance at this stage - our data shows we are running more drag than anybody else, and you can see we are losing on the main straight but not so much on all the other areas of the track. So we need to make an assessment after the first couple of races to see if we are lacking power. Realistically, we are missing about half a second on a single lap. Let's see tomorrow - whatever happens, we're gathering valuable learning. We have been in difficult situations in the past against a very strong Ferrari Power Unit and last year we were four tenths off Max at the first race, so we just have to keep our heads down and find the performance.

Andrew Shovlin: We were realistic with our expectations going into qualifying and anticipated a pretty difficult session, but considering the issues that we're having to manage on the car at the moment we weren't as far off as we might have feared. We only had a single Soft in the final session as we've biased our tyre selection towards the race, for Lewis it might have meant he found another tenth or two but probably wouldn't have changed the order. For George, only having the one set in the final session was much more costly; the tyres weren't ready and he lost seven or eight tenths, a second down on his Q2 time. We know we have to improve before thinking about fighting for the win so our focus is very much on damage limitation in the championships. We'll see where our race pace is tomorrow, there may be some opportunity for Lewis if either of the Red Bulls or Ferraris are struggling but he should be well placed to race all the cars lining up behind him. With George we have a bit of ground to make up but it's a track where that is possible.