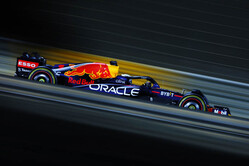 The sun has set, the circuit is floodlit and temperatures have dropped, giving us the sort of conditions we can expect for qualifying and the race.

Pierre Gasly was quickest earlier, but we have yet to see either the Bulls or Ferraris on the softs.

McLaren spent the earlier session working on its brake updates, while Mercedes has yet to show its hand.

Having suffered an engine issue, Bottas failed to post a time.

Ahead of the green light, Hamilton sits at the back of his garage, helmet on, as mechanics swarm over his car.

As more drivers head out, most are on mediums, though Norris and Ricciardo are on hards having spent the morning running the yellow-banded rubber.

Magnussen sets the benchmark with a 34.572, but Sainz responds with a 33.837. Moments later Leclerc posts purples in all three sectors, stopping the clock at 33.121, we already around a second quicker than Gasly's best earlier.

Hamilton, it appears has reverted to his old floor, while Ocon - following his self-detonating sidepod in FP1 - is running the old spec bodywork, the new bodywork expected tomorrow.

"We are on the limit of the bouncing, I can feel it on the straight," reports Ocon, referring to his car's porpoising.

"It's still bouncing a lot," says Hamilton as on-board footage confirms the problem, the Briton's head bouncing up and down. Indeed, he runs wide in Turn 1, throwing up a great cloud of dust.

Perez' first flying lap is ruined by a lock-up in Turn 8. Next time around however he improves to fifth with a 34.300.

With 40 minutes remaining, a few drivers are now switching to the softs, among them Ocon, Magnussen, Norris and Stroll.

Norris subsequently splits the pair - leaving Magnussen second - with a 33.280.

Leclerc remains quickest, his time set on the mediums.

A 32.877 sees Alonso go quickest as all bar Verstappen, Perez and Russell are on softs.

Verstappen heads out on softs as we enjoy an on-board ride with Hamilton as he bounces down the pit straight.

Verstappen goes quickest in S1, and again in S3, stopping the clock at 31.936, the fastest time we've seen at this circuit this year.

While Russell goes third (32.529), teammate Hamilton can only manage ninth (33.144). the seven-time champ reports a problem with his front brakes.

Having aborted his final flyer, Russell, like his teammate, pits for fuel in order to begin his long run.

Alonso improves to fourth (32.877) but is demoted when Sainz goes third with a 32.520. The Spaniard wasn't happy with his previous run, admitting that it was "full of errors".

Long runs very much the order of the day now.

Most are on softs but a few, including Alonso, Hamilton and Hulkenberg are on mediums.

Ricciardo's session appears to be over, the Australian's McLaren having suffered a water leak.

Mercedes claims that the reason for the difference in pace between its two drivers is down to Hamilton having a "malfunctioning" DRS.

Leclerc and Tsunoda are under investigation for an incident at Turn 8, the Japanese driver having seemingly impeded the Ferrari driver.

Perez is told that his teammate's last lap was 37.1, "that's on the money", the Mexican is told.