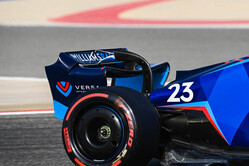 Admitting that it is difficult to evaluate the performance gaps between the compounds, Pirelli's Mario Isola believes them to be higher than originally thought.

Pirelli's 18-inch tyres were back in action in Bahrain for the second pre-season test, where temperatures were much higher throughout the three days compared to Spain, with ambient temperatures ranging from 22 to 39 degrees centigrade while track temperatures varied from 26 to 48 degrees. The second day (Friday) was the hottest.

The fastest of all was Red Bull's Max Verstappen, who set a time of 1:31.720 on the softest C5 compound a few minutes from the end of the final session on Saturday. Second quickest was Mick Schumacher, who, like Charles Leclerc and Fernando Alonso, who finished third and fourth, were on the C4 compound.

Over the course of the three days the drivers used most of the range of tyres, including the Proto C2s.

"The Bahrain test allowed us to gather additional useful data on the behaviour of our new 18-inch tyres on a circuit that's very different to Spain in terms of layout, temperature, and asphalt characteristics," explains Pirelli, Mario Isola.

"This was a test that you could split into two parts really: the first two days were very hot as well as windy, which meant that they weren't so representative as the high temperatures accentuated degradation and distorted the true picture of tyre behaviour.

"The third and final day was definitely the most important one, thanks to milder temperatures, improved set-ups, and degradation levels that were much more in line with our expectations.

"This allowed the teams to focus more on the tyres, trying out all the compounds available to them. It's still quite hard to work out the performance gaps between the tyres, but they seem to be slightly higher than we initially thought, with a similar time difference between each compound."