Verstappen: Nobody giving it "full beans" 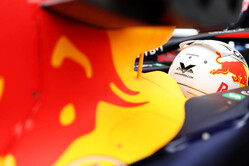 Max Verstappen plays down testing form, insisting that no team has shown its full hand.

Though he might have set the fastest time of the Bahrain test, Max Verstappen is refusing to get carried away, insisting that none of the team have revealed their true pace.

His owrds come as Mercedes, yet again, plays down its chances, Lewis Hamilton claiming that he will be lucky to fight for wins, far less the title.

While the Briton was well down the overall timesheet - 16th in fact - teammate George Russell was 5th, albeit over a second off the world champion's pace, but on the same C5 compound.

However, bearing in mind the old adage that proclaims, to finish first, first you have to finish, though the W13's handling is bad, it has completed the second most number of laps.

In terms of outright pace, however, Verstappen insists it is too early to call.

"Nobody is in full beans qualifying spec at the moment," he told F1TV. Of course its better in low fuel and actually on the high fuel the car is a bit lazy and doesn't really do a lot, but it's the same for everyone.

"The main focus was about the tyres that we're going to use next week," he admitted. "The car was feeling alright, and we went through our programme we planned to do, and that's always positive, I think.

"The new parts which were on today, they also worked well," he added, "which you always hope for. Hopefully we'll keep them on (for the race).

"But, of course, I think we learned a lot more about the car, so we made the car faster. And I think that's what you want."

"It's always like this," he laughed. "If someone is doing well or a team that everyone expects to do well, then it's: 'Oh no, we're definitely not the favourite'. Then a week later, when things do go well, all of a sudden it's: 'Oh no, but we turned it around completely within a week. Not normal, unbelievable work. Thanks to all people in the factory...'"

Referring to Ferrari, he said: "They clearly have a stable car at the moment. It looks good for them, they have had very few problems as well.

"We will see next week who is fastest," he continued, "but so far they have had a very good test. The last two years weren't great for them, so you automatically start looking at this season a bit earlier than some of the other teams. It's more than normal that they started earlier than us on the 2022 car and that's OK as well.

"In the end, with these new cars, the development rate during the season is the most important thing."