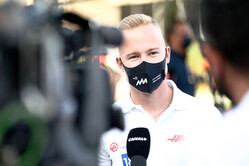 Nikita Mazepin has reacted to Haas' announcement that it has terminated its partnership with Uralkali and dropped him in the process, the Russian driver revealing that he was fully prepared to agree to the FIA's terms.

On Friday, the FIA announced a number of measures whereby drivers from Russia and Belarus could continue to participate in sanctioned events, these included denouncing the invasion of Ukraine, not sporting any symbols representing their country or even singing their national anthems.

In a post to social media in response to today's announcement from Haas, Mazepin reveals he was fully prepared to agree to the FIA's terms but Haas wasn't interested.

"I am very disappointed to hear that my F1 contract has been terminated," he wrote. "While I understand the difficulties, the ruling from the FIA plus my ongoing willingness to accept the conditions proposed in order to continue were completely ignored and no process was followed in this unilateral step.

"To those who have tried to understand, my eternal thanks. I have treasured my time in F1 and genuinely hope we can all be together again in the better times. I will have more to say in the coming days."

Of course, losing the Russian driver was one thing as far as Haas was concerned, losing his substantial backing, courtesy of Uralkali, quite another.

Mazepin was never given the seat at Haas on account of his driving prowess.