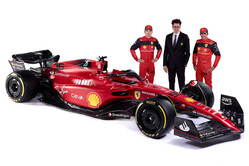 Ferrari drivers Carlos Sainz and Charles Leclerc are both impressed with their new car, hoping that the F1-75 is as fast as she looks.

While the FIA might have sought to do a (former Labour party spin doctor) Jo Moore and use the launch of the 2022 Ferrari F1 contender as a 'good day to bury bad news', the F1-75 appears to deserve some of the attention it is getting.

From the moment the first images finally appeared, members of the F1 media admitted respect at the manner in which the Maranello outfit has interpreted the new rules.

The overall feeling is that the car looks aggressive, leaving the tifosi hoping that after years in the wilderness their team can finally take the fight to Mercedes and Red Bull.

Though we are used to the platitudes of drivers at these events, the comments from both Leclerc and Sainz appeared genuine.

"It's innovative, different, thinking a bit out of the box," he added. "I like it because it's radical, which is what you want to see when you see a new car."

"We have the 75-year anniversary logo which I think fits well with the colour scheme, we are trying to represent the old days of Ferrari, you know, and I think this colour is a mix of what we had last year at the front, with what we had at the back.

"I think this is my favourite part of the car itself," he said of the engine cover. "You can really see how much work there has been for this bodywork, so yes, it looks impressive, it looks extreme, and I like this."

"If you look at the packaging a lot of effort went into the power unit," explained Binotto. "The packaging is very different, the cooling.

"The power unit we worked on a lot through the winter season, not only the entire last year," he continued, "we had to develop it because we know that it will be a key element for the next seasons.

"So, we developed it in terms of a lot of innovation on the combustion engine, a lot of development on the hybrids that we brought as development last year in the season but furthermore, I think there is quite a lot that has been done. It is covered. But obviously the suspension, we worked a lot on them, you can see different to the past, the rear wing.

"So, the cars are different in terms of the ground effect, the floors that we do not see here but as well in terms of the shape, at least for me it is quite incredible, the work which has been done."

The car will take to the track on Friday, when the team performs a shakedown at Fiorano.

"It will only be 15 kilometres per the regulations, not on the normal track," explained Binotto. "That's for a demo purpose.

"Then we will move to Barcelona, and the day before each team will start the winter session, so the 22nd, we will have a filming day, 100km," he revealed.

"So from now to the start of the winter testing, we'll have a couple of days, a demo event and a filming day where we'll run the car."