Williams and Alfa Romeo both took the opportunity to shake down their 2022 contenders today ahead of next week's opening test.

While the car shown at today's livery reveal was in fact an official F1 'show car' - understood to be the same one used by Red Bull last week, the real FW44 took to the track at Silverstone for a shakedown.

Shortly after the online 'reveal', Nicholas Latifi took to a soggy Silverstone to put the Grove outfit's 2022 contender through its initial paces.

"I'm super excited for testing in Barcelona, to get back behind the wheel, push and see what the car can do," said Latifi ahead of the shakedown. "Pre-season always feels like quite a long time, but it's been really busy and there's been a nice build-up at the factory with lots of hard work from everyone.

"The new regulations should allow for much better racing so I'm excited for the challenge and we will aim to gather some good data from testing, to take us into the first few races."

"As we move into the new era of our sport, the FW44 highlights the transition to the future, as well as acknowledging the timeless qualities that make us who we are," added Jost Capito. "Last season we were thrilled and proud to make such strong advancements as a team, with a number of well-earned points-scoring results in addition to a podium."

At a time the teams appear to be keeping as much up their collective sleeves as possible, hence the 'show cars' use whenever possible, Capito was loathe to make any predictions about the season ahead.

"It's very difficult to say, isn't it?" said the German. "I think compared to the top teams, we still were lacking that we didn't have investment over the last years. And now we are from last year, we were limited by investments by the cost cap as well. 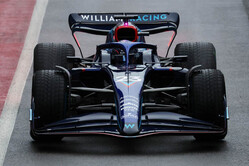 "But you know, everybody started from scratch with a new car," he added, "and it's very difficult to say where everybody starts out of the box. So for us progress will be how we can improve compared to competition during the season wherever we start the season."

Meanwhile, at Fiorano, Alfa Romeo's C42 completed a successful shakedown. The car, sporting a special camouflage livery, took to the track for the first time just after 11:00 to perform system checks.

In distinctly wintry weather, with rain lashing down on the track, Valtteri Bottas completed the first laps under the gaze of Team Principal, Frederic Vasseur, Technical Director, Jan Monchaux; and team-mate, Guanyu Zhou.

With all preliminary tests completed, the team will now prepare for the first test of the season, to be held in Barcelona on February 23-25, ahead of the official team launch on February 27.