F1 "moves on" from taking the knee 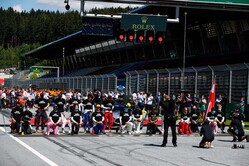 Stefano Domenicali reveals that the taking the knee ceremony before races is to be dropped though the sport will continue to push for greater diversity.

The ceremony was introduced to F1 in 2020 as part of its We Race as One campaign amidst the global reaction to the death of George Floyd and the subsequent focus on the Black Lives Matter movement.

Drivers were invited to take the knee in solidarity with the movement, a gesture first taken by NFL star, Colin Kaepernick, though some opted to stand during the ceremony.

Speaking to Sky Sports, F1 boss, Stefano Domenicali has revealed that the official ceremony is to be dropped this season though the drive for greater diversity continues.

"I think the gesture has been an important gesture because we need to respect everyone, as always," he said. "But now is the time to move on and take some other action.

"We needed to make sure that what we did was important to show the intention of Formula 1 in things that were really important for the world," he added. "I think now it's the matter of changing gesture, to action. Now the action is the focus on the diversity of our community, and this is the first step."

His comment comes as F1 confirmed that it will extend its funding commitment to the Formula 1 Engineering Scholarship programme for underrepresented groups until 2025, continuing its drive to increase diversity within the sport.

The scholarships were launched last year, following a US$1 million donation from Non-Executive Chairman of Formula 1 Chase Carey. The programme has so far successfully supported 10 students, who have begun placements in their undergraduate and postgraduate engineering degrees at leading universities in the UK and Italy.

Each scholarship covers the full cost of a student's tuition, together with living expenses, for the full duration of their degree. The programme will now be extended for a further four years, enabling scholarships to be offered to 10 more students each year from 2022 to 2025 inclusive.

"We are committed to increasing diversity and opportunity within this incredible sport," said Domenicali, "and I am pleased to confirm that we will be expanding our programme for scholars until 2025, providing fantastic opportunity for some incredibly talented students to begin their journeys with Formula 1.

"We want to continue to ensure that talent from underrepresented groups has meaningful opportunities, with the first 10 scholars already beginning their studies following Chase's incredible donation to fund the scholars in their first year. We want to continue and build on the foundations of the programme in the years ahead."

The decision to drop the official 'knee ceremony', comes days after Lewis Hamilton returned to social media, thereby easing fears that he had walked away from the sport.

"I saw the last picture was a light of positivity on his face and his gesture," said Domenicali. "I think that is important because Lewis is an incredible asset not only for our sport but for the world."

"There was a total respect on his choice to be on silent mode," he added. "I think he will be fully charged for the start of the season. Lewis has in front of him a possibility to be an eight-time world champion. So I'm sure he is totally focused on these objectives because this year there will be so many new things, so many variables, that will allow this championship to be so attractive."