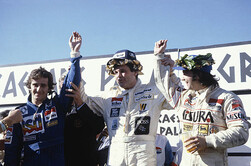 It's understood that a deal which would see Las Vegas host of the world championship from 2023 is "as good as done".

The Sports Business Journal reports that officials have visited the city several times in recent months and that a deal - thereby giving the United States three races - is imminent.

However, Pitpass can go one better, we have heard that the deal is "as good as done", furthermore, the track layout would include a section of the legendary Strip.

Also, in a canny move by F1 bosses, a number of the city's casinos are to contribute to the hosting fee, though one is still understood to be holding out.

For as long as anyone can remember there has been talk of a return to Las Vegas, which hosted two Grands Prix in the early 80s. However, the events were held on a temporary track in the car park of Caesars Palace hotel, which pretty much tells you all you need to know.

Since Liberty Media gained control of the sport there has been a marked drive to increase the sport's popularity in the US, and with the advent of the Miami Grand Prix, not to mention Netflix and Drive to Survive, the dream is being realised.

Speaking over the United States Grand Prix weekend last year, COTA boss, Bobby Epstein welcomed the idea of further races in the US, and dismissed claims that an additional race might dilute interest while also threatening the Austin event.

"We're already paired with Mexico City," he said. "We're a lot closer to Mexico City than Vegas would be to Miami. So I think if Vegas and Miami came in May and Mexico City and Austin come in the fall, that could be a great complement in helping it grow."