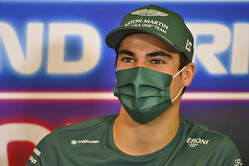 Lance: "This weekend will be my 100th Grand Prix in Formula One; and, as it's the final race of the year, it would be perfect to celebrate with a good result to end the campaign on a high. We've learned a lot this season that will help the team in the future, but we still want to make the most of every lap on the new layout in Abu Dhabi and aim for points."

Seb: There's been significant change to the Yas Marina Circuit, so it will be like going to another new track this weekend. We can expect much faster lap-times, and it will be interesting to see the knock-on effect to the tyres and strategy, as well as the changes we'll need to make to car set-up. Once again, we're aiming to end the season on a high with some good points."

Teams often attempt to make a one-stop strategy work, but Pirelli has allocated the softest range (C3, C4 and C5) for the fifth time this season, so high degradation is expected. The difficulty in overtaking, as well as a higher-than-average pitlane time loss of 23 seconds, previously made a two-stop sub-optimal, but changes to the circuit may increase degradation and improve overtaking and could now make a two-stopper more viable.

The new circuit changes are not only a challenge for the drivers, but also the teams. With higher speeds and wider apexes leading to faster lap-times, evaluating the impact upon the cars and strategy will also be a crucial focus of the three practice sessions - even though FP1 and FP3 are held in warmer, less representative conditions.

The layout changes are expected to improve overtaking. On the old layout, there were 30 passes in 2020, 32 in 2019 and 28 in 2018 - and 79% of all passes occurred along the two back straights, into Turns Eight and 11. In those previous three races, 70% of all overtakes used DRS - even despite 2019's event featuring significant DRS issues.