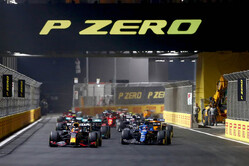 Despite losing his podium place in the final seconds of the Saudi Arabian Grand Prix, Esteban Ocon insists he feels "very proud" of his race.

On pole for the second restart of the race, the Frenchman was involved in one of the many controversial incidents that littered the race as he went into Turn 1 three abreast with the title protagonists.

Leading the race for one lap, he was subsequently passed by Verstappen and then Hamilton and held station behind them for much of the remainder of the race.

Indeed, it was only on the final lap, the final straight, that Valtteri Bottas was able to pass the Alpine driver.

Though disappointed to miss out on the podium, Gasly remains proud of his afternoon's work.

"I gave it my all today," he said at race end. "The competitor inside of me is disappointed to miss out on the podium by such a short distance, but I'm very proud of the whole team today.

"What we achieved is outstanding and to take fourth place and add 12 more points in the bag in the championship is what counts," he added.

"We took the right decisions in the race, we did everything we could on track and on strategy at the right moments, which put us in the best possible position to take big points.

"It was quite fun to start on pole position too," he grinned, "I've not done that since 2015 in GP3, but I knew my race was not with Lewis and Max in front.

"That said, the opportunity was there today and we can leave here with our heads high and feeling very proud. We move onto Abu Dhabi ready to finish the season on a high and take any opportunity that might come up."

Ocon's 12 points mean that, heading into the final round, Alpine has a 29 point advantage over AlphaTauri in the battle for fifth in the team standings.