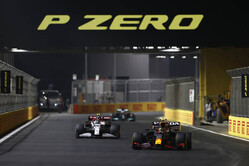 While as impressed with the Jeddah track as his rivals, Lewis Hamilton admits concern at potential danger zones due to traffic.

Moments after going quickest, Valtteri Bottas gave praise to the Jeddah track, admitting that it is "f****** cool".

Cool it may be, but onboard footage showed another side of the Saudi track, for other than its narrowness, which will obviously impact overtaking, even in the three DRS zones, lap speeds of over 150 mph mean a vast difference between those drivers on hot laps and those either building up a head of steam or cooling down.

As one watched the onboard footage one's heart was constantly in one's mouth as drivers negotiated one blind turn after another before suddenly coming across rivals going much, much slower.

Charles Leclerc's late encounter with the barriers was the result of a mistake by the driver however the potential for a serious coming together due to the vast difference in speeds is clearly there.

Speaking in the moments after the second session, Lewis Hamilton was as enthusiastic about the new track as his rivals, yet concerned at the potential for disaster.

"It's definitely a lot worse than a lot of places we go to," he said. "It's Monaco-esque, the speed, the closing distance on other cars, is definitely getting to a bit of a danger zone.

"It's rapid, unbelievably quick," he added. "It really is incredibly fast, and a lot of grip as well. What I noticed straightaway is that the grip is just very, very high, from the moment we went out. I don’t think we were much quicker in this session, we were pretty much the same.

"If you can get the rhythm it's beautiful to drive," he added.

Such were the traffic issues that when the qualifying sims got underway in FP2 few drivers were able to improve due to having their laps ruined.

Over the course of the two sessions there were a number of 'close encounters', a couple involving the world champion.

"Traffic's going to be really difficult because everyone is flying," said Lando Norris. "It's not that anyone's doing anything wrong," he insisted. "It's just because you can't see round one corner.

"Of course, my engineers are trying to give me feedback on it, that there's five cars waiting ahead and stuff like that, but you've also got everyone overtaking you so they'll go ahead and then you've got eight cars queuing at the last corner.

"It's probably going to be chaos, as it always is," he warned, "but maybe here more than other places, which is not going to be good. But it's part of it. We'll see what we can do."

Asked his initial thoughts on a weekend that could see the title decided, Hamilton said: "Over a single lap they are quite quick so we've got a bit of work to do. The medium and the hard tyre... you saw Max on the hard tyre at the beginning in FP1 and he was going quicker than on the softs.

"The soft tyre is probably a little bit too soft for the high-speed sections," he continued. "It seems the tyre is giving up a little bit, but it’s still exciting trying to master the tyres.

"My long-run pace was not too bad," he added. "We made some changes between sessions, I'm unsure which one I want to stay with.

"It's definitely not in a bad place," he insisted. "Our long run pace was kind of similar, but otherwise decent. We'll study through it tonight and work with the guys back at the factory to try and make sure we come up with the correct setup for tomorrow."