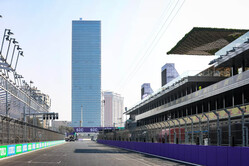 For the penultiame round of the 2021 season, Formula One heads to Saudi Arabia.

While the track will be finished in time, it is understood that some of the facilities are not yet ready and alongside the traditional sponsors signage we might well expect to see banner declaring "wet paint".

For their debut on the F1 calendar the Saudi have gobe for it, creating what they bill as the fastest street track in the history of the sport, and among the top five fastest venues the series has ever visited.

Featuring no less than 27 corners, the Jeddah Corniche Circuit is 3.836 miles (6.175 kms) in length, making it the second longest circuit on the current calendar behind the legendary Circuit de Spa-Francorchamps and the longest street circuit in the sport.

With three DRS zones, thereby ensuring plenty of overtaking opportunities, the fact the race takes place at night under floodlights will only add to the atmosphere.

And as if this wasn't enough, there is the little matter of the world championship(s) to be decided.

On the other hand, should Mercedes outscore Red Bull by 39 points this weekend - as they did at Silverstone - the German team claims its eighth title.

Interstingly, Saudi Arabia is the 34th country in the history of the sport to host a round of the Formula One World Championship, while, should he win the title, Max Verstappen would be the sport's 34th champion.

The nature of the circuit clearly favours Lewis Hamilton and Mercedes, the Briton looking to benefit from the so-called 'rocket' enmgine he put to such good use in Brazil.

However, with an 8 point advantage, it would be foolish to write-off Verstappen's chances.

Due to the uncertainty, Pirelli is playing safe by taking its C2, C3 and C4 tyres, but is the Italian manufacturer erring on the side of caution or taking a risky gamble.

One of the most demanding of the 27 corners is Turn 13: a left-hander featuring 12-degree banking that should place high g forces on the tyres and with more corners than any other track on the calendar, the tyres will be ket working hard all weekend.

Many parts of the circuit are quite narrow and unforgiving, with the walls close to the side of the track. This could lead to a reasonably high safety car probability, affecting strategy.

A night race, like all the last three races of the season, this means that the pattern of track temperature is different to a normal race, with temperatures dropping over the course of each session. FP1 and FP3 are held just before sunset, with only FP2 on Friday and qualifying on Saturday (both starting at 20:00) likely to be representative of the race.

Other than the battle for the championship, there reamins the fight between Ferrari and McLaren for third, while AlphaTauri will be seeking to make up for the disappointment of Qatar.

Another team out to impress will surely be Williams, which will be keen to score a point or two following the death of team founder, Sir Frank Williams at the weekend.

Latest odds from Betway see Hamilton at 1.5 for the win, Verstappen (3.25), Valtteri Bottas (13), Sergio Perez (21) and Charles Leclerc, Lando Norris and Pierre Gasly all on 67.