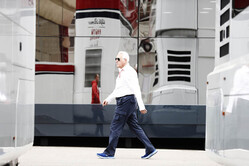 Mavericks have an uneasy relationship with teams.

Teams frequently meander, lost without the obsessive drive, and passionate vision of a maverick. Yet mavericks frequently find themselves alone, ruined, ideas in tatters, should they destroy their team before journey's end.

Praise be when that rare time is realised, with the team and the Maverick finding balance, generating more than enough glory to go round.

Enzo burned with passion, igniting and firing his drivers in equal measure over the years. A win? It was the engine! A loss? It was the driver. A crash? Is the car salvageable? A driver injured? Kindly bring another. (Famously, on hearing of Alberto Ascari's death while testing at Monza, Enzo replied (in Italian) "and the car?" - Ed). Passion and vision more than enough to enthral employees, drivers, a nation and motor fans globally, all swaying hypnotically to the obsessive rhythm of the grand dance on which Enzo led them all.

Jaguar cars are a delight fashioned with passion since the maverick days of William Lyons. Yet their Formula One adventure, albeit many decades after Mr. Lyons' days in the sun, was supposed to deliver "An English Ferrari" not the inordinately high driver salaries and weak results that eventuated. Let the sands of time drain a little further from the optic and we find Jaguar success eventually as the Red Bull Formula One team. So not exactly the "English Ferrari" of Jaguar dreams, but at least they now win races and delight race fans. Igniting fan's hearts with passion? Enflaming their souls with a vision as powerful as bottled midnight sun? Possibly not.

Toyota! 140 race starts over seven years for just seventeen podiums. For the world's largest car manufacturer, this was a result as dull as driving Pike's Peak in a base model Corolla... in first, with a 2,000 rpm rev limit... No inflamed passions, or anything else around here, other than the balance sheets smoking darkly from the first day to the last. Rather a sad adventure all told.

Which brings us neatly to the cool granite door step of Aston Martin. Where else did you think this meander was leading dear reader?

Founded on the 15 January 1913 by Lionel Martin and Robert Bamford it has a story which contains more passion, spirit, and wild beating hearts than cool logic, rational investment, or indeed enough money to continue to function. Seven bankruptcies in 108 years being an average of one every 15 years or so. Ouch!

So far the soul-saving star of the story is David Brown, stepping in during 1947. Promptly applying leadership artfully blended with a large side-order of luck, thus commencing to turn out clean-lined, hand-built, modest handling, not terribly fast, but fast enough, grand-tourers that in short order became legend. The DB5 in the 1964 film Goldfinger being so tastefully piloted across Europe by one Mr. J. Bond helping in no small part to imbue spirit, delight, and adventure into the brand at a joyfully accelerated pace. Indeed the number of Astons in the latest Bond film is enough to make any sensibly minded GT-lover go very misty eyed.

Fast forward through a number of reworked Jaguar donor cars and some patchy interior build qualities, and one has a succession of glorious grand tourers and the occasional sports car that are a delight to the eye, while providing the humming of angels to ears of those that love a large capacity engine being driven with a robustly immodest intent. Old-school push-rod V8 madness, wrapped with finest leather, and a touch of hand polished wood, edged in fresh new-season woollen carpet? Right this way please Sir!

With these legends dancing in our mind we step softly onto the granite doorstep of Aston HQ to take stock of the latest chapter. A slow breath before placing both palms on the deep weathered racing green paint work of the oak door, easing it open with a firm, slow arm. This decade we find Mr Lawrence Stroll as the potential saviour in waiting, or, as yet to be determined by the rolling of the bones by Lady Luck, the fates, and the demons in the detail, is he in fact the next Aston Martyr about to be truly burned by the soul crushing experience of trying to navigate Aston down the path of glory, and not an eighth bankruptcy?

Most of the ghosts of Jaguar's past have been exorcised from the building. An angle here, a wheel-base there. With a respectful nod to ascetics, all graceful GT coupes are around the same size and there are only so many arcs of grace a designer can pull around 21 inch wheels.

Back to the track. Le Mans 1959 saw the first racing win for David Brown with the DBR1 sports car. It had been pre-dated by the 1957 development of the DBR4 Formula One car, but for various reasons the sports car programme took priority over the Formula One effort. As a result, when the DBR4 debuted on track for the 1959 Dutch Grand Prix it was already two seasons old. The drivers, Carroll Shelby, and Roy Salvadori, qualified 10th and 13th, before suffering double retirement during the race. At the next race, the British Grand Prix, Salvadori managed to place the DBR4 second on the grid, somewhat to everyone's surprise. He managed to hold on to convert this to a sixth place, just outside the points, by the chequered flag, While Shelby again suffered a mechanical failure.

At the Italian Grand Prix it was Salvadori who suffered the mechanical failure, while Shelby managed to wrestle the car home to 10th place.

The DBR5 for the 1960 season was an evolved version of the DBR4, and as a result was still front-engined at a time when the fastest on the grid were the newly developed rear-engine cars. As a result it was another season of zero points, leading to their withdrawal from Formula One, to focus on sports car racing.

Yet these early racing odysseys still give a weight to the miasma in the building that, once you breath it in it will linger bitter-sweet in your motoring soul.

2006, and David Richards, he of Prodrive fame, looked to enter Formula One with Aston Martin, or at least the name, yet following several false starts nothing ever happened that resulted in a car making the start grid. Then, a full decade later, and the 2016 season saw Aston join the grid as a major sponsor of Red Bull Racing.

With the Martyr in waiting, Mr. Stroll, taking a controlling interest in Aston in January 2020, the 2021 season saw Aston return to the grid for the first time as a works team since 1960. A modest 61 year gap.

Yet what have all those years done to the legend that is Aston?

Those great cars of the David Brown era stalk the halls fogging the minds of all who enter. So now the more recent automotive art works of the DB7, DB9, DB11... each echoes with the reverberating memory of a hammering exhaust note bouncing wildly off Swiss Mountain granite, another daring alps run safely complete. Yet the modern reality of English suits pulled tight across muscular German chests. Is that the future fans are calling for?

The 2021 season race car appears to have a size 12 German body, awkwardly squeezed into a size nine English suit. Not really a good look, while providing only modest outcomes. The road cars are far finer looking works of mobile art. Yet they sell in a fraction of the numbers that Porsche manage. Ferrari is unique and sales comparisons, or even image comparisons, are a waste. Comparing Astons to Porsche and the more extreme offerings from Audi, BMW, and Mercedes is a far more reasonable comparison. Here in Australia dealers are still trying to shift 2019 Astons with mere inches on the odometer rather than furlong after furlong of furious flying miles.

Indeed, Sebastian Vettel has driven his Aston further than most of the demonstrator models available here in Australia combined. What does that say about the lust for Aston carbon and steel in the garage of the motorised-art appreciating public with the hefty wallet to match wonton desires?

Why does your scribe once more link on-track bravery with off-track sales? Because, like it or not, racing is, and always will remain expensive. A company backing a racing team needs excessively free flowing rivers of cash. Cascades of cash that in general is generated by selling a large number of cars at a healthy profit margin. Two keys points here. "Large numbers" and "Healthy Profit".

One can obtain a free flowing nose bleed trying to clamber to the top of Porsche's profit margin. Likewise Mercedes generates waterfalls of cash that would make Amazon blush. Then we have dear, eccentric Aston, and Mr. Stroll's puddles of cash. Huge when compared to mere mortals, each of us whom have, possibly, a small sherry glass or thimble awash with cash compared to Mercedes. If it were a true spending war between Mercedes, and Mr Stroll, I know who I'd back in a dollar-based war of attrition. From another perspective recall that Mercedes provide the beating hearts and complex electronics of Mr Stroll's road-going Astons, and the power units for his racing cars. Are they likely to sit back, and let him run circles around them on-track, at their own R&D expense? Quite.

Can saint in waiting or martyr with hem already alight on the funeral pyre, Stroll pull it off? Or is his soul soon to be cursed for eternity? Is the beauty of a road going Aston still strong enough to enthral enough history loving, well monied, English heritage (even if it is now German) rejoicing bohemians in plentiful numbers that keep the balance book black, and thus underpin the success of the Formula One team?

On track as the season draws to a dramatic close Vettel is peddling hard, and fast. He appears to be enjoying himself more like the Red Bull days, and increasingly less like the long dark nights of Ferrari. But is it enough? Stroll junior is also showing some fine form, a couple of drives in the wet showing he can actually peddle hard, and fast.

Is this a new era about to dawn, or the same old Aston error, with a new wallet freshly cremated? Either way, us, the car loving, Formula One rejoicing, fans are assured of a delightful journey as the story unfolds into 2022. The "Cost Cap", aka "Yet more jobs for all those accountants that lost their London-based jobs when Brexit hit" will ensure a different playing field next season, as will new Pirelli tyres, larger rims, and new design rules.

Yet that cheery old rebuke is never far from my mind when I think of "Cost Cap". Remember the golden rule... he who has the gold, makes the rules. Do we really think Aston and Williams will crowd out the podium next season as Mercedes, and to a far lesser extent Red Bull, and Ferrari, have crowded it out for the past eight?

Yet fortune favours the brave. Please do not walk into your future Mr Stroll! Run! Swift of foot, and strong of heart, for regardless of outcome your stain glass window awaits! The archway, and colours have been chosen, we just await next season to see what the image shall be, and if martyr, or saviour, needs to be etched neatly beneath.