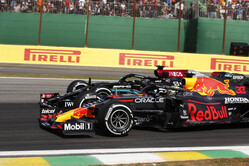 Despite claims of a lack of consistency in stewarding, the FIA is against calls for permanent stewards.

The lack of an investigation into Max Verstappen's actions during the Brazilian Grand Prix has left drivers questioning exactly what is allowed and what isn't, and while Michael Masi has attempted to explain the situation, the feeling among the drivers is that there remains a lack of consistency in terms of stewarding.

Consequently there have been calls for the appointment of a team of permanent stewards in the hope that a fixed team would look at every incident with the same eyes.

That said, the sport did previously have a fixed panel of stewards but this was abandoned over claims of bias towards certain teams and drivers. Since then, the sport has favoured a rotating panel selected from an established pool, the structure at each race consisting of a chairman, a former driver and two others usually provided by the local motorsport body.

Masi is not in favour of the proposal for a permanent panel.

"I think the stewarding that we have now with the pool of four chairman, that we shared the pool of driver, stewards, and all of that, the way all the chairman meet regularly," he added. "We need to take a step back and remember that's it's the first time in a long time we are in a real championship fight between two amazing drivers, two fantastic teams.

"As a regulator, last time I saw, there's no regulator in the world that's going to be popular," he continued. "Regardless if you're a referee, if you're a regulator of any sport, that's part of the role that we fulfil, and from our perspective there will always be slight differences but, at the end of the day, the stewards are there to make those decisions."

"To be honest, my opinion hasn't changed," he tells Speedcafe.com, "I don't think that not having permanent stewards is the issue there, to be honest.

"As far as I understand, whenever there's a case popping up the first thing the stewards are doing is going back to the history of cases and see where precedents and check if this is comparable or not, in order to try to be consistent.

"I understand also so that after each race weekend, there's a lot of exchange all the steward in order to make sure everyone is on the same level of information and understands what happened in detail.

"That's why I don't think that is that's a big issue we are having here, to be honest."

"In Brazil, I very much rate (Tim) Meyer, who was the head steward there," added Toto Wolff, "I think it was just the circumstances were bizarre.

"They are under so much pressure," he continued. "I wouldn't want to say about any stewards that they're good or bad because I wouldn't want to be in a steward seat, because somebody is always going to complain.

"Being a steward is a professional job," he added, "and it should be well paid, the pressure should be rewarded. Whether it's a permanent institution, I don't know, but in any case, the best people should be doing it.

"And I think we've seen many, many good stewards and I still trust in any outcome."