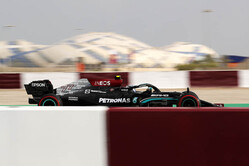 Like yesterday morning's session, due to the fact that qualifying and the race take place in the evening when temperatures are cooler it is pretty much unrepresentative.

However, with all the data acquired yesterday, and the analysis that will have been undertaken overnight, including in the simulator, the teams will want to put all that hard work to good use.

Track limits continue to be an issue and while these are now under observation at all 16 corners, it is at Turns 2, 7 and 16 where drivers will have their times deleted.

While the rules on track limits should normally be enough, a number of drivers continued to push the envelope yesterday, and in addition to having their times deleted a few incurred damage.

In all honesty, with every session the rules appear to change. Indeed, the race director's event note look like our old school book with whole sections crossed out and others added in purple ink only to be crossed out again.

All in all the drivers like it here, most of them describing it as "fun".

Though they look well matched, Mercedes appeared to have the edge yesterday. However, with Red Bull openly questioning the legality of the W12 it will be interesting to see if we witness Brazil levels of difference in pace.

Indeed, while Bottas topped the timesheets, Hamilton complained of being "a little bit slow".

Looking particularly strong yesterday was Gasly, though teammate Tsunoda was on the pace also, while Aston Martin and McLaren looked good. Ferrari and Alpine were both a little off the pace.

Ahead of the green light, crew members are lined up across the Red Bull garage in a clear attempt to keep prying eyes and lenses out as work is carried out on the rear wing.

The lights do indeed go green and Schumacher is first to head out. Teammate Mazepin has had a new tub supplied overnight.

As the Russian heads down the pitlane he is told to stop immediately as crew members rush to his aid.

As the session is red flagged, the Russian says: "The car did not sound right, the engine."

The session resumes with 55:30 remaining, again, Schumacher gets things underway. Moments later he is joined by Ocon, both are on mediums.

While Schumacher pits, Norris heads out on softs and Ocon posts the first time of the day (24.864).

Norris posts a 25.689 as Bottas heads down the pitlane, followed by his Mercedes teammate. Both are on the red-banded rubber.

Raikkonen goes third, ahead of Giovinazzi, Norris, Tsunoda and Schumacher.

It's a good lap... until Turn 14, where he carries too much speed and heads off into the distance. Despite that he goes fifth with a 24.954.

Twenty-two minutes in and the only driver yet to appear is Verstappen.

"I just lost it, what the hell was that," asks Gasly after spinning at Turn 2.

Verstappen finally heads out, on softs, as Hamilton goes quickest in S1.

Leclerc is informed where he's losing out to his Ferrari teammate.

Verstappen is quickest in S1, the Dutchman maintaining a strong pace in the second sector also. At the line it's 23.121, 0.031s up on his title rival. Meanwhile, Perez goes fourth with a 23.737.

"A mistake in the last corner," admits Latifi, "just trying to understand the wind here."

Having heeded the advice, Leclerc improves to sixth with a 23.581 only to be demoted when Tsunoda bangs in a 23.567.

Hamilton is told that he's losing out to Verstappen in minimum speed at Turns 12 and 13.

Bottas posts a 26.737 in the opening sector as Hamilton is also looking hot.

Quickest in the final sector, Leclerc gores fourth with a 23.276.

Verstappen improves but remains 0.412s off Bottas' pace. He is subsequently told that he picked up front wing damage in Turn 15. He duly pits.

As most head back to the pits, Sainz and Gasly have the track to themselves, both are on softs.

While the Frenchman subsequently pits, the Spaniard improves to fourth with a 23.229.

The McLaren pair head out on fresh softs, as does Bottas, as the qualifying sims get underway.

Norris is off at Turn 15 and while he is able to continue there remains the question of possible damage.

Out come the yellows when Leclerc spins after applying little too much power exiting Turn 2.

Hamilton posts a 22.388 to leapfrog his teammate, the world champion benefitting from a tow at the start of his lap.

Latifi and Schumacher have times deleted for exceeding the limits at Turn 2.

With 6:44 remaining, Verstappen heads out on a fresh set of softs.

Alonso posts 23.186 to go seventh, three places ahead of his Alpine teammate.

A spin for Schumacher in Turn 2 brings out the yellows, but that shouldn't worry Verstappen as the German soon gets going again.

At the first split, Verstappen is already down on Bottas, and while he closes the gap in the second sector, at the line it's 22.651, 0.341s down on the leading Mercedes.

"The gears are not synched," Verstappen complains.

A late improvement sees Gasly split the Bulls with a 22.835.

For the second successive session Mazepin plays no part. Yesterday he required a chassis change while today his issue is the control electronics which have been changed over the course of the session.

On paper, this looks to be Mercedes to lose, with Verstappen not looking at all at ease, a situation not helped by the continuing issue with his rear wind which sees the upper DRS element oscillating wildly.

Of course, conditions will be different this evening and several times this year already we have seen teams turn things completely around during the break.