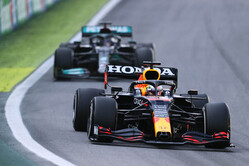 Max Verstappen: "I knew today would be difficult, but I did everything I could, we were just lacking a little bit. At least it was a fun race, of course I would have liked to have won but realistically I think this was a good result. Lewis and I were fighting for position on multiple occasions, I think it was hard racing but good racing and that's how it should be. I was hoping for a little bit more performance but this result is definitely the maximum we could do. Top speed wise it was tough to defend, you can clearly see when they take a fresh engine that it gives them a bit more power, so hopefully that will die down over the coming races. There are three races coming up that will be completely different again, so we'll see how it goes."

Sergio Perez: "It was close today and it was fun, but I am not here to have fun, I am here to deliver. I had a great start but then it was very difficult to hold Lewis back, I tried my best to hold onto him but I couldn't, he was flying! Then we were ahead of Bottas by two seconds, we had the position and we had the podium but two laps later the virtual safety car came in. That timing was extremely unlucky for us and it worked perfectly for him, he managed to do the undercut and then pull five seconds away from us. It is a bit of a shame we lost the podium but I was able to build a big enough gap to the Ferrari in fifth to pit and go for fastest lap, which is an important point for the team. That straight-line speed of the Mercedes is just unbelievable, we were not able to match them and today they were on another planet. Ultimately it is a good result for us today, I don't believe there is much we could have done differently, it's just a shame because we should have finished ahead of Bottas had it not been for the VSC. Today the luck wasn't with us but there are still three races to go and everything to play for so we will keep pushing. Now we look forward to Qatar and hopefully there we can be competitive."

Christian Horner, CEO and Team Principal: "To come away with second and fourth today, plus the fastest lap was damage limitation this weekend. We scored 20 points for Max this weekend versus their 25 for Lewis in the Drivers' Championship, so we'll take that. We put up as good a defence as we could, Max did his best and raced hard, and Checo made Lewis have two goes to get past, and he came back with a great move to reclaim the place after Lewis' first effort. But we saw Mercedes pace from Friday and then again yesterday, so today wasn't too much of a surprise. They did a good job and Lewis drove a great race today, so well done to them. We've got some catching up to do this week. There's a lot of racing still to go, so we'll brush ourselves down and come back fighting in Doha."