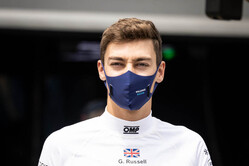 George Russell qualified 13th and Nicholas Latifi 17th for the Mexico City Grand Prix. George progressed into Q2 before setting a best lap time of 1:18.172 on the soft Pirelli tyre. Following a gearbox change, he will take a five-place grid penalty for tomorrow's race. Nicholas recorded his fastest lap, a 1:18.756, on his final effort of Q1 using the soft tyre but unfortunately missed out on progressing to Q2.

Dave Robson, Head of Vehicle Performance: Following a post-session inspection, we opted to change George's power unit after FP3 as a precaution. The mechanics did an outstanding job to get the car ready for the start of Qualifying, and as we fitted a power unit from the existing race pool, there will be no penalty for this change.

After the red flag in Q1, we completed two runs with each car, with George able to progress to Q2, but Nicholas, struggling a bit more to get the most out of the tyres, was unable to progress. He will however benefit from several back-of-grid penalties for cars that qualified ahead of him. George will also benefit but will serve his own five-place penalty for fitting a new gearbox overnight.

The tough conditions here in Mexico will make the race tomorrow difficult for everyone and we believe that, despite losing track time in the afternoon, we prepared the car well yesterday for the Grand Prix. We will find out tomorrow if we did a good enough job, but we are hopeful of making progress.

We have been unlucky to suffer with several unrelated issues in a short period of time, and this has put the mechanics under a lot of pressure. However, their fortitude, skill and outright quality has been evident throughout and they have tackled everything thrown their way to deliver two good cars for qualifying. It was a tremendous team effort today and typical of what we have seen throughout the last few years.

George Russell: The engineers and the mechanics did a great job as they have worked very hard over the last 24 hours changing two gearboxes, and a power unit between FP3 and Qualifying. At one point, it looked unlikely we would make it out for the session and here we are having qualified 13th so a big thank you to them.

My lap in Q1 was really strong. I couldn't really improve in Q2 so I was a little bit disappointed, but all things considered it was a good session. It's going to be a difficult race tomorrow and everyone is going to have to be managing their engines because of the high altitude. Whoever manages this best will come out on top so there are opportunities to be had.

Nicholas Latifi: The weekend in general has been tough as it's not the best track for our car. For the grip that I had, it felt like a decent lap, but I just couldn't get the tyres in the right window so we've got some things to look at. I'm expecting a difficult afternoon tomorrow but, with the number of penalties across the grid, we will gain some positions and start further up. We will focus on our own race and try to keep the cars behind.