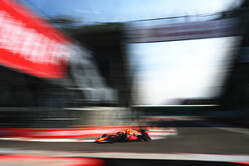 OK, we've missed the first 40 minutes due to a localised power-cut so we will need to catch up later.

As it stands, and with the qualifying sims still to comer, it's: Verstappen, Bottas, Perez, Leclerc, Sainz, Ricciardo, Hamilton, Giovinazzi, Gasly and Vettel. Verstappen's best is almost 0.5s quicker than Bottas.

Heading out, Leclerc spins at Turn 3 but is able to continue.

Norris, who will take a grid penalty following an engine change, has his time deleted. Ocon is also to start from the back of the grid after taking on new power unit components.

PBs in the first two sectors are followed by a third as Perez - on used softs - goes second with a 17.272. The crowd rises.

Meanwhile, there's a lot of attention focussed on the rear of Verstappen's car which is still in its garage.

Norris improves to seventh and Stroll eighth, as a mistake in the stadium means Alonso cannot improve on 14th (18.816).

A scrappy opening sector from Verstappen, who, like a number of drivers, appears to struggle on his first lap. Indeed, he backs off in the second sector.

Told that Perez is 0.651s quicker, Hamilton is almost speechless. "Six and a half tenths..." he repeats, almost incredulous.

Ricciardo leapfrogs Leclerc for seventh with an 18.121.

Hamilton's reaction to that 0.651s gap says it all, and though Mercedes might yet have something up its sleeve, the big question is, can Perez claim pole for his home Grand Prix?