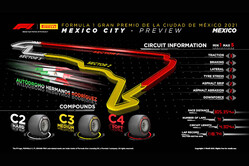 Like the United States Grand Prix, the Mexican Grand Prix is back on the calendar after a two-year absence. The tyres in the middle of the range have been selected for this race: C2 as the P Zero White hard, C3 as the P Zero Yellow medium, and C4 as the P Zero Red soft. This is the same selection as was made in 2019, when the race was held few days earlier, but a step harder than in 2018 (when it was noticed that the C5 soft tyre was too aggressive a choice for Mexico).

Although this is also the same tyre nomination as made for COTA a fortnight ago, the Autodromo Hermanos Rodríguez is very different in character, being much smoother, with two tight and twisty final sectors as well as a long start-finish straight as part of a rapid opening sector. This puts particular emphasis on braking, with traction a key element as well. The versatility of the P Zero tyres in the middle of the range makes them well-suited to the specific demands of the Mexico City track.

This is one of the historic circuits in Formula 1, with its roots back in the 1950s, but it has since been extensively updated - most recently by renowned circuit architect Herman Tilke - before returning to the schedule in 2015.

At around 2285 metres, the Autodromo Hermanos Rodríguez sits at the highest altitude of any track on the calendar (by more than 1000 metres). This means that the air is very thin, so although the cars run high levels of downforce to try and generate aerodynamic grip through corners, in reality the downforce effect is extremely minimised, which can lead to some sliding.

The top three in 2019 all ran a one-stop medium-hard strategy (with some long stints seen on the hard) although Ferrari's Charles Leclerc finished fourth with a two-stopper that featured two medium stints. The soft C4 wasn't used extensively due to graining - although this was reduced between free practice and the race, with drivers starting on soft generally able to complete the grand prix using two stops.

The track has not had a lot of running over the last couple of years. As a result, the drivers can expect a particularly ‘green' and slippery surface at first, which should evolve rapidly over the weekend. The weather is also unpredictable at this time of year in Mexico City, with the possibility of showers that can ‘reset' the asphalt.

Mario Isola: "The high altitude in particular, as well as the circuit layout itself, always throws up a number of interesting challenges and surprises in Mexico, so it's often an unpredictable race with a wide variety of strategic options. Last time, the medium and the hard were the main tyres that the teams focussed on during the race: depending on the amount of graining and sliding seen on the soft, this might be the case again this year. So understanding the performance gap between the soft and the medium will be key for qualifying. Mexico is a historic and exciting circuit, so after a two-year absence, we're delighted to be heading back. The race is held at roughly the same time of year as it was two seasons ago and there are no significant track alterations since then - apart from one small bit of resurfacing before Turn 1 to level out a bump - but the cars have changed a lot so it's hard to say if the data from 2019 is still relevant."