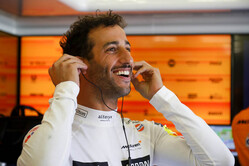 Daniel Ricciardo defends his clash with Carlos Sainz in the closing stages of Sunday's Grand Prix which the Spaniard claims was deliberate, indeed "a bit dirty".

Battling for fifth, Sainz made a move on the McLaren, however the Australian held his line and in the process made contact with the Ferrari.

The Spaniard, now falling behind the McLaren, complained to his team that the move was deliberate, while the damage incurred in the clash left him vulnerable in the final stages of the race when Valtteri Bottas was able to pass.

Ricciardo and Sainz had been thorns in one another's side from the very start of the race, the pair joined in battle by Lando Norris who was forced off track by the Spaniard.

"I was so scared," said Norris at race end, "because the thing is, it's such a wide track and it was three abreast. I knew Daniel was on the outside so I had to be careful. I couldn't brake too late because I knew Charles (Leclerc) was just ahead.

"The angle, I was on the apex and Charles was pretty much… I was going to T-bone him if I went in any harder," he added. "It got a little bit sketchy, obviously didn't pull the move off. Bit of a shame."

"We obviously went side-by-side, and a little bit of banging wheels," said Ricciardo of the latter clash, according to Speedcafe. "It was fun, and I needed to hold on for everything I could.

"Obviously you don't deliberately try to go into someone," he added, "but that's obviously a bit of a bit of rubbing racing. And when you put yourself on the outside, obviously you're a little bit more exposed.

"Nothing was deliberate," he insisted, "but I guess it's the risk that he ran by trying on the outside."

Told of the Spaniard's radio message, he laughed and said: "That's cool, I'm happy to be dirty. I'm a nice guy, so being dirty every now and then is alright!"

Talking about the first lap incident at Turn 12, he said: "I got Carlos I think on the start, then he got me back with a good move outside of 6 into 7, and then I got him back Turn 17 on the inside. It was three kind of changes in position on the first lap, which was cool, but that was crucial for me to get a top five.

"Charles showed that Ferrari were quicker," he added, "we couldn't match that pace today. Obviously that's something we've got to still try to find, but to beat one of them is quite rewarding."