Perez: My toughest race ever 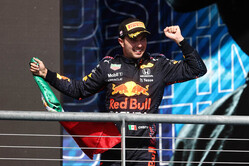 Suffering diarrhoea ahead of the race, and his drink system failing on the opening lap, leaves Sergio Perez facing the toughest afternoon of his career.

Our race report described the 42s gap between Sergio Perez and race leaders Max Verstappen and Lewis Hamilton as inexplicable, but that was before we knew the facts.

Having suffered diarrhoea - which everyone knows badly hydrates you - ahead of the race, the Mexican's drink system failed on the opening lap, leaving him facing the toughest afternoon of his career.

"A horrible one," he responded, when asked about his race.

"I struggled massively," he continued, "since Lap 1 I ran out of water. I couldn't drink at all. I think by the middle of my second stint it started to get pretty, pretty difficult, you know, losing strength. I think it was my toughest race ever, physically.

"I was really losing out, strength," he added, "it was really difficult, especially the last 30-40 laps were extremely tough."

"He's been a bit under the weather this weekend, he's had a bit of a cold," team boss Christian Horner told Sky Sports, "so that was tough, not to have the drink system.

"But again, the way he managed the race, you can see his confidence is growing. That's the second race in a row he's on the podium now.

"His home race is coming up, and he's finding his form, which is crucial for us at this time of the year," he added.

"There are a lot of positives to take from the weekend," insisted the Mexican. "My race was, I think, firstly compromised by the tyres that I had and being on the scrubbed medium, I think was quite a bit of a disadvantage considering how high the degradation was today.

"And then, I struggled massively, physically, from lap 20 onwards, so it wasn't an ideal race. But I think we managed to stay within the undercut region from the leaders and that really triggered the undercut, firstly with Max on Lewis.

"We tried to do the same with Lewis and he had no other option but to pit, so we avoid him doing his optimal race, so I think in that sense it worked well - but since lap 20 onwards, I was pretty much done."

Asked if he has ever felt as bad after a race, he said: "No, it's the first time. And I hope the last one."