"That was bold," admits Wolff of Red Bull strategy 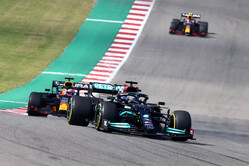 "They went for a super aggressive first stop, and that was bold," the Austrian told Sky Sports at race end, referring to the decision to pit Verstappen on lap 10 after losing the lead of the race at the opening corner.

"We did that in Bahrain at the beginning of the year, and we won" he added, referring to the fact that the undercut allowed the Dutchman to retake the lead when Hamilton pitted just three laps later.

"We were debating about the undercut, but lap 10 or 11, or whatever it was, was very early," he admitted. "We were too slow on the medium and therefore we didn't think that the hard would last.

"P2 was, for me personally, is better than I expected," he insisted. "We started really well on Friday, then we went a little bit off-track, and then we recovered in the race.

"It was just the car was not quick enough on the medium," he said. "At the end, it's always a fine line between downforce and drag."

Red Bull's second stop was equally risky, the Dutchman pitting 8 laps before Hamilton, which left him vulnerable for the final few laps as the Briton pressed home his advantage of fresher tyres.

"We thought our offset strategy, going longer, would be enough at the end to get them," said Wolff. "But the moment you get within touching distance of the car in front, it makes it very difficult to make a move. The moment you get close to the other car it's difficult.

"At the end, you know, we thought that we had a sniff at it," he added, "but it wasn't enough. We thought maybe that's enough at the end to get them, but they deserved to win today. In the end we were close but not close enough. It was some interesting strategy games and great racing.

"We haven't talked yet," he responded when asked how Hamilton felt. "We have to both get over it. That's going to take 30 minutes."