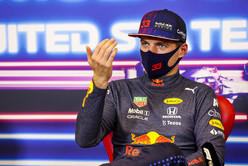 Much to the disappointment of some sections of the media, the title protagonists promise a clean start at COTA, insisting that despite the "fun and games" they're "professionals".

Based on the evidence thus far, one can expect certain sections of the media to be on the edge of total hysteria in the moments after the lights go out at the Circuit of the Americas today.

As we are assured that F1 is now bigger in America than all other sports combined, and today's Grand Prix will be the biggest sporting event in American history, with title rivals Lewis Hamilton and Max Verstappen sharing the front row we can expect a race build-up like no other.

We have already been informed that the intense rivalry isn't confined to the drivers, with the respective team leaders also said to be totally contemptuous of one another.

If said sections of the media are telling us the truth, even Roscoe wants in on the action, while Mrs Horner is said to be contemplating releasing an album in which she reveals her loathing for Mercedes Adelle-style.

Yet while those sections of the media salivate at the thought of a Silverstone or Monza incident - replays of which will be played on a loop in the hours leading up to the start - the title protagonists promise to keep it clean.

Of course, the stage was set on Friday, when Hamilton pulled a cheeky move on his rival just as he was about to start his flying lap.

Incensed by the move, Verstappen made a gesture before uttering the words - readers of a nervous disposition should look away now - "stupid idiot!"

Asked about the incident and whether we can expect more of the same today, Hamilton said: "I didn't run him wide, he decided to go around the outside and ended up going wide. We were battling in the last corner and it's a silly thing.

"It's all fun and games," he added, "and we're going to have fun tomorrow and give it everything as you would expect, there's no real difference to any other part of the season.

"I hope we make it through Turn 1 and we get a good race," he teased the salivating mob, before adding: "I don't think it's all decided on Turn 1."

Asked, in mind of previous incidents, how he will handle the start, Verstappen - pictured making the infamous 'come on then, if you think you're hard enough' gesture in the post-qualifying press conference - responded: "Like we always try... as professionals.

"I don't see why we always have to keep bringing this up," he continued, "it's not like we're the only ones who have touched in this sport. These things happen, unfortunately.

"But I think we are on the front row again and everyone is just expecting a great race and that's what we also expect as drivers, and we just want to have a really good race."

Don't believe a word of it, the media is correct - isn't it always - they hate one another and it's going to be a case of no holds barred.