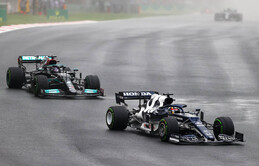 Pierre Gasly: "I'm really happy to be back finishing in the top six, I think this is probably one of our best performances this season, particularly in these difficult conditions. To be finishing just 10 seconds from the podium, after a five second penalty, is really good for us. The Turn 1 incident was a bit unfortunate, I was sandwiched between Sergio and Fernando, we touched a little bit but it was just enough to spin Alonso, so I want to say sorry to him. After that though, the pace was really strong, and I'm pleased with the performance of the car this weekend, it feels nice to have been fast straight from Friday again."

Yuki Tsunoda: "It's a real shame today, as I think I could've been in a position to finish in the top 10. I used too much tyre early on, battling with Hamilton, and after that it was really hard to keep up the pace. Unfortunately, I then had a spin, and this ruined my whole race. Today was another big learning curve for me, completing so many laps on the Intermediate tyres, but I'm disappointed as I was really hoping to get points to help the team in the championship."

Franz Tost (Team Principal): "We have had quite a successful weekend here in Turkey. Yesterday, we finished Qualifying with both cars in the top 10, so Pierre started today's race in fourth, after Hamilton's penalty, and Yuki in ninth position. Unfortunately, Pierre had a collision with Alonso at Turn 1, and this resulted in a five second penalty for him, which he had to serve at the first pitstop. However, he managed to keep his sixth position, as Norris was seven seconds behind him. After the pitstop, he drove the sixth place home, doing a fantastic job despite today's difficult conditions. This was the first time that the drivers have been out on the Inters for this many laps, so no one from the engineering side knew how long the tyres would last for or how well they would work. This is why it was not an easy call to decide when to pit, but I must say that our strategy group did a really good job, particularly with Pierre, who stopped at exactly the right moment. Yuki also had a good start today and spent quite a few laps in eighth position, managing to keep Hamilton behind for a long time, showing a great performance. Later on, he unfortunately spun and went back to 14th position. It was an enormous learning process for him, as he had not driven in the wet that often, so he now understands more about how the Intermediates work and he is more familiar with the car in these conditions. Generally speaking, the team showed a good performance this weekend and we've managed to score more points for our battle for fifth in the Constructors' Championship. We're now looking forward to heading to the United States."