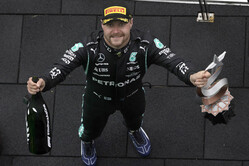 Mercedes driver Valtteri Bottas won the Turkish Grand Prix from first on the grid, using a one-stop strategy with two sets of Cinturato Green Intermediates. The same strategy was adopted by nearly all the drivers. Bottas then took the lead from Ferrari driver Charles Leclerc with 11 laps to go, with Leclerc having stayed out much longer on his original set of starting intermediates.

Many drivers undertook very long opening stints on the intermediate tyres, with the track featuring a range of wet and damp conditions from start to finish. Mercedes driver Lewis Hamilton stopped after 50 laps for a second set of intermediates, eventually finishing fifth from 11th on the grid following a grid penalty (having set the fastest time in qualifying). Alpine's Esteban Ocon did not stop at all for a tyre change, finishing the race in 10th on just one set of intermediates.

Ferrari's Carlos Sainz made up 11 places with two stints on the intermediates, coming from 19th on the grid (after an engine change penalty) to eighth at the finish. The Spaniard was voted driver of the day.

Conditions were cool with intermittent rain throughout the race, finishing with 17 degrees centigrade ambient and 19 degrees on track.

Mario Isola: "Following wet conditions in Saturday's free practice, we had wet weather from start to finish of the grand prix today. However, this was never heavy rain that required the full wets: instead it was perfect territory for the intermediates, which showed themselves to be very well-suited to a wide range of changing wet conditions. The drivers who changed their tyres in the final stages of the race found a slightly drier track, leading to a bit more graining. Those stopping earlier were able to limit graining on a wetter track, and this was a key advantage in the intermittent rain conditions. Bottas ran the perfect strategy under the demanding circumstances: a one-stopper with two runs on the intermediates. Many other drivers delayed their pit stop: also because it wasn't clear to what extent the track would dry out before the end of the race, perhaps even allowing a final run on the slicks. Going for the whole race on the intermediates though was not what we would advise, and in fact we alerted some teams to the potential risk of doing that. Nonetheless, the performance of the intermediates was very strong here, without a single driver retiring despite the slippery conditions over all 58 laps."