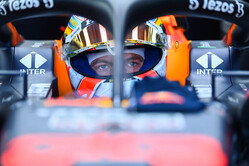 This weekend we are celebrating what would have been Honda's last home race in Japan, what will you miss most about the Japanese GP?
Max Verstappen: I really enjoy the Japanese Grand Prix so it's a shame that we will miss it. I will miss the fans the most, it's always a lot of fun seeing the fans in Japan as they are so passionate about Formula One. I also hope they like the new livery that we have on the car this weekend.

You'll be racing in a unique livery and race suit this weekend, are you excited to see the car and does it feel special to race in a one off race livery?
MV: It always feels special to race for Honda, even without the special livery. For us as a Team and for Honda to miss out on the Japanese GP is a shame, but it's cool that we can do something in Turkey instead to celebrate. I'm excited to see the it and it's really special to have the car look different for a race so I'm looking forward to that.

What are your happiest memories of racing with Honda?
MV: My happiest memories with Honda are of course the wins, especially my first win with them, that was very emotional. Working together with Honda has been such a pleasure and they are super motivated every single race and they are super passionate in terms of delivering the best they can all the time. So it has been really enjoyable working with them.

Last year's Turkish GP was one to forget, how are you feeling heading into this race weekend?
MV: Last year's Turkish GP was of course not the best weekend for us as a Team but I think it will be quite different circumstances this year, hopefully the tarmac will be a bit more grippy. I think it will be quite a new weekend in general for everyone, there will be a lot to learn so I'm looking forward to seeing how competitive we are there.

You had a strong race in Russia, leading multiple laps, has that given you the confidence going into the final seven races?
Sergio Perez: I am very confident in this car, I think lately we have been showing good signs of pace, but I am conscious we must put it together to get the car where it deserves on the grid and then back into scoring those big points, to get us where we want to be in the Championship, come the end of the season.

You've been working hard at the factory with your Team since the Russian GP. How beneficial has that been?
SP: Yes, we did a lot of work after Russia to analyse what went wrong and what went right and where we can look to improve. I have spent some more time on the sim ahead of Turkey too, so we have done some pretty intense homework for this weekend. I am looking forward to the last seven races now and I am sure our luck will turn, we are performing well on track but now we must show that with our results on a Sunday, I want to be back on the podium this weekend.

This weekend we are celebrating what would have been Honda's last home race in Japan. What is your experience of Honda so far?
SP: I have been very impressed with Honda and I am very proud to be a part of such a historic brand. I love the Japanese culture and how the team at Honda work, the moment you speak to anyone there, they start working on your ideas straight away. They are an inspiring organisation to work alongside.

Max's second place finish in the Russian Grand Prix was only the second podium finish ever scored by a Red Bull when starting outside of the top 18 on the grid. The other occurrence was at the 2012 Abu Dhabi GP, when Sebastian Vettel finished third after starting from the pitlane

Red Bull's fastest-ever race lap at the Istanbul Park circuit still belongs to Christian Klien, who set a 1:26.374 in the 2005 race, the year in which both the Turkish GP and the Red Bull Racing team made their Formula 1 debut

Istanbul has regularly been kind to Red Bull Racing through the years. No Red Bull car has qualified outside the top four at this track since 2008

Checo is one of only five drivers on the grid who raced on this track during its original run on the F1 calendar, doing so in 2011. The other drivers are Lewis Hamilton, Sebastian Vettel, Fernando Alonso and Kimi Raikkonen.