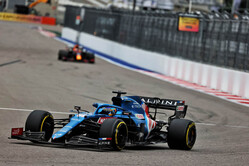 One of the stars of Sunday's race was surely Fernando Alonso. Once again, the Spanish veteran used all his hard-learned skills to deliver a masterclass in stalking one's prey and nailing it.

Though he lost a couple of positions at the start, despite a cheeky, previously rehearsed, ''mistake' at Turn 2, he subsequently steadily made his way back through the field and by half-distance was running third.

Extending his opening stint on the hards to lap 35, he rejoined the race in seventh.

When the rain began to fall six laps from the end, like Hamilton and Norris he opted to stay out, and though was able to climb up to third he, like the McLaren driver, ultimately paid the price for not stopping sooner.

Nonetheless he finished the day sixth, thereby adding a further 8 points to his tally. However, the Spaniard believes he deserved more.

"Norris did an amazing race," he added, "and just by luck, he's not on the podium or his first ever win in Formula 1.

"When it rains it's just a very lucky factor," said the veteran, two-time world champion. "And I'm sad because when we are not competitive and we are P11 or P12, it never rains so we never get lucky. And today we are P3, and t just rained. So not sad but definitely we are not very lucky."

Reflecting on the season thus far, he said the team has worked hard for its results and deserves any success.

"We could have finished today on the podium. So there is something that we are doing good on the weekends and on Sundays, especially to score so many points with sometimes not the fastest car out there.

"So I'm very proud of the team, of the progress. We are working towards a very strong team and looking for next year hopefully the package is competitive out of the factory, but the team here at the race weekend is ready to fight."