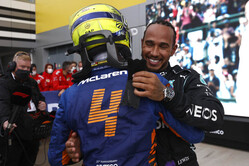 Refusing to let Lando Norris shoulder all the blame for tyre call, McLaren boss, Andreas Seidl insists it was a team decision.

Though one couldn't help but feel enormous sympathy for Lando Norris after the Briton lost out on an almost certain win, there was also the feeling that had he heeded the advice of his engineers things wouldn't have gone quite so wrong.

As the rain began to fall, Norris rejected the suggestion to pit for Inters with a firm "shut up!" followed by an even firmer "no!"

However, when the Briton slithered off track to be passed by Lewis Hamilton, who had similarly held out on slicks for as long as possible, it came as no surprise when Norris, who had now dropped to fourth, said: "I've got to pit, I can't do this."

By the time he eventually made it back to the pits Norris had slipped to eighth but subsequently made up a place by passing Raikkonen.

It was little consolation for the youngster, who was quick to take responsibility for the decision to stay out.

However, team boss Andreas Seidl insists that the team was equally responsible.

"In these tricky situations it’s the communication between the driver and the pit wall, using all the information we have available in terms of weather forecasts, looking what other cars are doing, trying to brief Lando and at the same time get the feedback from Lando on how the track conditions are," said Seidl.

"Lando, with the information he had from us, how he was feeling on track, he felt good staying out there on the slicks.

"He knows this is part of the game, part of the learning as well," he added. "But not just on his side, the team's side as well because I think there is always a chance to overrule him from the pit wall side from the information we were getting.

"In the end, together we made this call to stay out," he insisted.

"I think on Lewis' side we heard the discussions and it was pretty much the same," he continued, "and on Lewis' side he had the chance to wait for what we were doing and do the opposite because he was in P2 at this point and we didn't have this opportunity.

"We wanted to go for the win, that's why we decided together to stay out. That's why it didn't work out.

"We win together, we lose together," he added, "the important thing is to analyse it, to learn from it, and then move on.

"At the same time, I think we have seen a lot of positives this weekend.

"Daniel has done a sensational job all weekend.

"He did a sensational race, unfortunately did not end up in the result we would have deserved at the end of such a weekend.

"But for the last few laps, it was actually a pretty good weekend for us."