Bottas ready to "take one for the team" 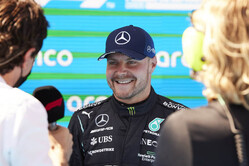 As he prepares to head to Alfa Romeo, Valtteri Bottas admits that he is fully prepared to obey team orders as teammate Lewis Hamilton targets eighth title.

Whatever tipped Mercedes decision when it came to naming Lewis Hamilton's 2022 teammate, we know that the seven-time world champion was more than keen to maintain the status quo.

Time and time again, Hamilton has assured us that Valtteri Bottas is the best teammate he has ever had.

As if to prove the point, with eight races remaining and just 5 points separating the title protagonists, the Finn has said that he is fully prepared and willing to accept team orders as Hamilton targets a historic eighth title.

"We have discussed many things internally, including different scenarios," the Finn told reporters as the Russian Grand Prix weekend got underway in Sochi.

"Every race is different," he continued. "There could be times that we need to play as a team, and I need to take one for the team. And in this situation, how the situation is, yes I would do it because we're here as a team and need to make sure we win both titles. Not only the constructors' championship but also the drivers'.

"At moment, Lewis has greater chance for that... that's the situation."

Of course, though 85 points down, the Finn still has a mathematical chance of claiming the crown for himself, though he has yet to stand atop the podium this year.

"In Formula 1 you never know how the season progresses, there is still a fair amount of races... so never say never," he said.

"The only thing I will keep doing is try my best, try to win races, try to be as consistent as I can to bring the points. And... if I'm allowed? I don't know really. You need to ask Toto. But for sure, it's still a reasonable gap in the points.

"At least earlier on in the season, I felt like I wasn't really any more allowed for contention, but you never know, we go race by race.

"For me personally coming here to this track, the only thinking in my mind is winning. It's all that matters to me, and that's my approach this weekend."