Prost threatens to walk away from F1 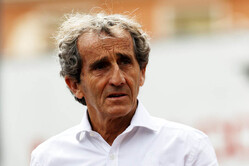 Little by little, the sport's powers that be are introducing new gimmicks intended - so we are told - to spice up the action and level the playing field.

Ahead of next year's great re-set, at present attention is focussed on the Sprint.

On the evidence of Silverstone and Monza, the Sprint hasn't been having the impact F1 bosses had hoped for, but it is clear that they intend pressing ahead with the concept.

After all, what is the most exciting part of the standard Grand Prix weekend? Other than the final moments of qualifying it is the start of the Grand Prix, for it is at the start and over the course of the lap that follows that there is the most chance of a headline grabbing incident as the drivers jostle for position.

For casual fans and even those with a passing interest, it is the anticipation in the moments before the red lights go out, and the moments that follow, that are the highlight of the weekend.

Now, with the introduction of the Sprint, F1 gets two starts, double the bang for its buck, no wonder the likes of Ross Brawn - with the full support of the broadcasters - continue to sing the concept's praises.

While the Sprint is currently being trialled, recent comments from Stefano Domenicali suggest that it is here to stay, indeed there is even talk of a separate Tennis-style Grand Slam championship for the Sprint events which are now being considered as standalone races.

With the teams (and promoters) having rejected proposals for two-day race weekends and also reverse grids, F1 bosses are still considering their options, and speaking in Italy Mattia Binotto appeared in favour of trialling reverse grids.

However, Alain Prost, arguably one of the sport's greatest drivers, and now a 'special advisor' with Alpine, admits that should reverse grids get the thumbs up he would walk away from the sport.

"I think it's good that Formula 1 is trying some things," he tells the French team's Prost in the Paddock podcast, "but you have to understand why you want to do this.

"You have to ask yourself why," he continues. "Formula 1 must remain traditional. We have to understand the best car and the best driver win because they are the best. That's the whole idea of Formula 1.

"I hate the idea of a reverse starting order," he admits. "I hate it. If they introduce the reversed grid in Formula 1, I would leave the sport.

"I think that's the worst thing you can do for Formula 1. I would rather see a team dominate because they did the best work than a reversed grid.

"But I am very traditionalist. They also experimented with points for pole position at the time, which I was not happy about."