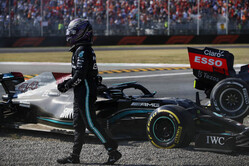 Red Bull's Helmut Marko has said that Lewis Hamilton was putting on "a show" when he talked of the discomfort and pain he felt following Sunday's crash at Monza.

"I feel very fortunate today," Hamilton told reporters at Monza in the aftermath of the incident. "Thank God for the Halo which saved me, and saved my neck.

"I am so grateful I am still here," he continued. "I feel incredibly blessed that someone was watching over me today.

"I don't think I've ever been hit on the head by a car before," he added, "and it is quite a big shock for me. We are taking risks and it's only when you experience something like that that you get the real shock of how you look at life and how fragile we all are. If you look at the images of the crash, my head is really quite far forward in the cockpit.

"Being in the car, all I could think of was getting going and how many positions I was losing," he admitted. "I'm still just in race mode, so it's just like: 'how can I get going again?', I'm sitting there in a little bit of pain, but just like, 'come on let's go'. But unfortunately the car wouldn't move."

Referring to Hamilton's "surprise", when Max Verstappen climbed from his car and started walking back to the pits without checking on the condition of his rival, Marko told Austria's OE24: "Verstappen had already got out when Hamilton tried to get out of the gravel with the reverse gear," he said.

"The medical car saw this and drove on," he added.

"And then a show is put on that poor Hamilton is suddenly injured..."

However, the Austrian, who was initially a fierce critic of the Halo, admits that it did its job on Sunday.

"Even if I was sceptical at first, I have to admit... just like in the fire accident (with Romain Grosjean in Bahrain), the halo was decisive in ensuring that things turned out so well."

Referring to the race, he said: "I was most annoyed about our botched pit stop. That's the only reason Hamilton got into Verstappen's zone.

"It was a normal racing accident," he insisted, "and all the stories surrounding it have been pulled out of thin air by Mercedes."