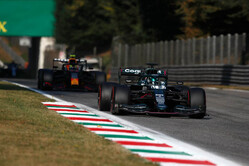 Lance Stroll: "That was a fun race today. It was not an easy decision to go for the soft tyre over the medium because, while it provides a better launch, degradation becomes a factor later on. We made a good start and gained some places in what was quite a tricky first chicane with all the tyre smoke and loose grass. I then had some good wheel-to-wheel racing with Checo [Perez] later on, too. He gave the position back to me a little later than I expected, which lost our DRS train and allowed [Fernando] Alonso to close in, but we were able to hold onto 10th. We will start tomorrow's race in the mix for points and I think we can extract a little bit more pace from the car overnight. Overtaking is tricky here so strategy will be important, but I am looking forward to racing again tomorrow."

Sebastian Vettel: "It was a tricky race for me. I made a good start off the line, but I had nowhere to go in the packed field of cars so I locked up into Turn One. As a result, I had significant flat spots on the front left and right tyre, which created a lot of vibration. It became a race of damage limitation. We will start in a similar position in tomorrow's race to where we did today. As we saw this afternoon, overtaking can be difficult because it is hard to follow the car in front, but we will see what we can do and try to fight for points."

Otmar Szafnauer, CEO & Team Principal: "Lance delivered a strong drive to P10 in today's sprint, and is therefore well placed to score points in tomorrow's feature race. Having said that, having cut the chicane while passing Lance, Checo [Perez] was decidedly canny in waiting until Lance had lost a tow from [Antonio] Giovinazzi's Alfa before giving the place back; in so doing, Checo was then able to deploy DRS to repass Lance almost immediately. After a tricky lap one, and a race compromised by flat spots, Sebastian drove well to P12, and will also be aiming to score points in tomorrow's feature race."