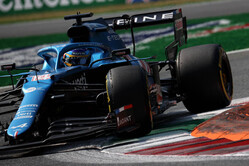 Formula 1's second ever Sprint Qualifying got off to a chaotic start with Fernando and Esteban climbing one place each after Pierre Gasly ran wide at Turn 3 and retired from the race.

A Safety Car was brought out for the stricken Alpha Tauri and racing resumed once it was cleared. At the restart, Fernando immediately charged up to Sebastian Vettel ahead and, after a few looks, claimed the position from the German into Turn 6.

Esteban nearly followed suit but found himself stuck behind the Aston Martin despite a few attempts at the overtake, including a bold effort on lap 13 around the outside of Turn 4.

Both drivers then tried to take further positions but found themselves stuck in a DRS train around the 5.793 km circuit, taking the chequered flag in eleventh and thirteenth. The pair gain an additional spot for tomorrow's 53 lap race, due to a grid penalty for Valtteri Bottas for an engine change, meaning Fernando lines up tenth and Esteban twelfth.

Esteban Ocon: "Today could have been better and we didn't quite make the most of all the opportunities. We had a good first lap and I was a bit unfortunate with the run out of Turn 2 and then the Safety Car coming out just as I was making a move at Turn 4. After that we were following Sebastian [Vettel] the whole way and I couldn't complete the move on him. It was one of those races where we could have probably gained more places. Tomorrow is the main race, which is longer and there will be more things happening with strategy also to come into play. We'll be going for it to make our way into the points."

Fernando Alonso: "We took two positions today and it means we start a little higher tomorrow so I am happy with that. I would have liked to have gained more, but it was difficult to follow closely here. If I was at home watching as a fan, then I would probably have enjoyed it because you get two days of racing. It's going to be a race decided by small margins tomorrow, so we have to make sure our pit-stops and strategy are good."

Davide Brivio, Racing Director: "We managed to gain some positions in today's Sprint Qualifying, which was our objective. Tomorrow we will start the race with Fernando in tenth and Esteban in twelfth and that certainly puts us in the mix to score some valuable points. We used the Softs today and this gives us some useful information to use for our strategy decisions tomorrow. It's a much longer race tomorrow and we will be ready to jump on any opportunities ahead of us."