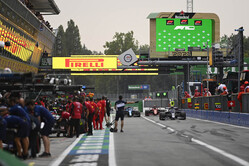 The Monza stewards have fined Aston Martin and Alpine following incidents during qualifying for the Sprint.

Several cars were released into the pit lane at the same time, and in the ensuing mayhem a number of drivers had to take avoiding action, almost hitting a crew member in the process.

At Aston Martin Sebastian Vettel was released, but at the same time the team's other car was also being released. This caused the German to move towards the fast lane when Lewis Hamilton was passing, causing the Briton to take avoiding action to avoid an incident.

At Alpine, a crew member who was responsible for releasing Esteban Ocon stepped back into the pit lane, close to the fast lane into the path of Vettel.

While the stewards accept that members of other teams also stepped this far into the pit lane, they did not obstruct another car and were not in a particularly dangerous situation.

The Stewards determined that this was an "unsafe act" and fined the French team 5,000 euros.

The pitlane incidents came on top of the usual near misses at Monza - and other tracks - as drivers slow and back one another up in a bid to create a gap ahead of a flying lap.

While this is particularly a problem in Q1 or at the end of practice when there are more cars on the grid, the issue is exacerbated at Monza where drivers are also seeking a tow.

As we have said before, this is an accident waiting to happen.