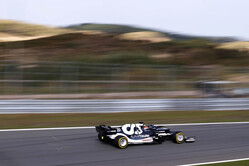 Pierre Gasly: "I must say it was really fun today, it's an amazing track to drive on and very unique, especially turn 3 - it's like sliding in a toboggan, with the banking. Obviously, the sessions were interrupted quite a lot with the red flags, so it was difficult to make it through our whole programme, but we still managed to complete a lot of it. I think we're not looking as good as we would've liked but hopefully, we can work tonight to find a bit more performance for tomorrow. I'm confident we can do that. I think traffic in Q1 tomorrow could be an issue and I need to try to avoid this mess. Then I think looking towards the race it will be very difficult to overtake, so the priority is getting a good starting position."

Yuki Tsunoda: "In the morning we were testing some aero components, but we had a minor PU issue that we had to investigate and weren't able to go back out. For the rest of the session, I watched a lot of on-board videos from other cars and tried to learn as much as possible before the afternoon. In FP2 I completed my first push-lap, I tried to take it easy at first as there's not a lot of run-off areas on this track. At the end I managed a lap I was quite happy with, I obviously need to do a lot more work tonight, but I felt quite confident in the car and it was important for the team to get this data, so we can prepare for Qualifying tomorrow. I think Quali will be really important, as it seems that it'll be difficult to overtake here during the race, so hopefully I can put it altogether when it counts tomorrow."

Jonathan Eddolls (Chief Race Engineer): "We had quite a complicated day, having some issues with the car as well as a number of red flags, which had an impact on our test plans. Pierre had a busy programme in FP1, completing a number of aero tests before the red flag. Following this it was just a case of fitting the Softs and getting a lap in but, of course, everyone had the same idea, so there was a large amount of traffic on his fastest lap. Unfortunately, Yuki had some reliability issues during FP1, which meant he was unable to complete a single timed lap during the session, which somewhat put him on the back foot, given this is a brand-new track. This was traced to a minor PU issue, which we were able to resolve, and the mechanics did a great job getting the car ready to run in FP2.

"We worked to a typical plan for both cars in the afternoon, with short runs on new tyres before the longer run at the end of the session. Yuki spent the session building up the pace and in the end on the soft tyre he set a respectable lap. Pierre continued with the aero test plan, gathering further data for us to analyse tonight. We seem to be lacking a bit of pace on the short run, so we have some work to do tonight to understand how to improve the car. Also, given it's a new track and many of the corners are linked, driver lines can be quite different, so we will spend some time analysing all of the GPS and video data, which we have at our disposal. It looks very tight in the midfield, but of course our aim is Q3 tomorrow."