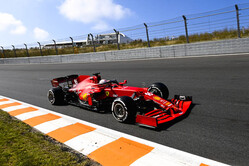 Lewis Hamilton had the edge over Max Verstappen in this morning's session which was seriously truncated following an engine failure on Sebastian Vettel's car.

As a result, following the red flag period there was six minutes of frantic activity during which there were a couple of hairy moments as driver scramble for clear track.

Hopefully this afternoon's session will be trouble-free and give us a better idea of the pecking order.

The start of the session is delayed by five minutes however, it will still last the full sixty minutes.

At 15:05 the lights go green, Raikkonen once again leads the way, followed by Perez, Mazepin, Leclerc and Giovinazzi. In a matter of moments there are 13, 14, 15 drivers on track, most sporting mediums.

As Verstappen heads out, leaving Vettel as the only no show, the crowd erupts and orange smoke fills the air.

"Losing power," warns Hamilton as he grinds to a halt at Turn 8. "Stop, stop, stop," he is told. The crowd erupts.

As the seven-time champion pushes his car to safety the session is red-flagged. While there is no need for a fire extinguisher, unlike Vettel earlier, Hamilton returns to his car several times to ensure that everything is OK.

The session resumes with 47 minutes remaining and one by one the drivers head out again.

Interesting to see how differently drivers are taking the banked Turn 3, some taking a quite tight line, while others run wide in an effort to get a slingshot on to the following section.

Switching to softs, Ocon goes quickest in S1, subsequently crossing the line at 11.074.

Bottas switches to the red-banded rubber, as do Latifi, Alonso and Mazepin. The Finn subsequently improves to 11.353.

Vettel heads out and immediately goes eighth with a 12.194.

Told to pit, Alonso says he was hoping for more laps.

Gasly goes third with an 11.648 as Verstappen heads out on the red-banded tyres.

As Stroll goes quickest in S1 and Verstappen begins his flying lap, Mazepin is off and in the gravel at Turn 11. Replay showing the Russian simply carried too much speed into the chicane.

The session is red-flagged as the stranded Haas is extricated from the gravel.

Once again the session resumes, but there is no immediate rush to action.

Eventually an engine fires up, it is the Honda of Verstappen followed by the Ferraris of the Alfa Romeo pair.

The cameras pick up on the gravel that Mazepin has deposited on the track at the chicane, according to Christian Horner one of the sections where Red Bull is really struggling.

Attention now switches to heavy fuel runs and while most stick with the softs, Ocon is on mediums, as are Stroll and Schumacher.

On the longer runs, with heavy fuel, Verstappen is around half-a-second quicker than Bottas. The Finn is told that he's losing out at Turns 2, 10, 11 and 12.

Ocon warns that the stones (gravel) on the track could cause issues, as Bottas is shown running deep in Turn 11 and adding to the problem.

Switching to the mediums, Bottas begins to match Verstappen's pace.

The session ends and the drivers head to the pit straight to practice their grid starts.