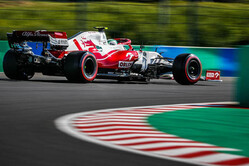 Under a scorching sun and cheered on by the many supporters of the team on the grandstands, the team delivered a big improvement to the performance of the two C41 cars from morning to afternoon, with Kimi and Antonio able to progress to the second segment of qualifying by clearing their most immediate rivals by more than a tenth of a second.

In a Q2 interrupted by a red flag due to the incident to Carlos Sainz, Kimi and Antonio made the most of their remaining set of fresh tyres to book the seventh row on the grid - a good position to start the race on a track that doesn't promote overtaking.

The team will now focus on choosing the most effective strategies to maximise the result of tomorrow's race, with tyre degradation one of the key topics in the heat of Budapest.

Delivering a good result would also be the best reward for the hundreds of fans who visited the Alfa Romeo Racing ORLEN Team Booth in the Silver Fan Zone. So many supporters came to admire one of the team's cars and shop exclusive merchandise in this dedicated facility, with exhibits and activities geared for true Alfa Romeo Racing ORLEN fans. Some lucky punters also got the chance to meet one of their idols, reserve driver Robert Kubica, in a dedicated virtual meeting, and to win signed items - making their Hungarian Grand Prix experience even more memorable.

With just the Sunday race now left, the best way to send these amazing supporters off into a happy summer break would be to finish in the top ten. We're working on it.

Frederic Vasseur, Team Principal: "It was a really strong performance as a team - actually, our best collective result so far this season. We were able to make a significant improvement from practice, where we had struggled, and both drivers felt a lot more at ease with the car straight from the first run of qualifying. In a field with such small margins, to clear Tsunoda's AlphaTauri in P16 by more than a tenth and leave Russell's Williams nearly 0.2s behind us is a very positive result. Both Kimi and Antonio delivered good laps in Q2, where we only had one good set of tyres left, and achieved positions that will allow us to be in the fight for the points right from the start tomorrow. Now we have to build on this strong Saturday to bring home a good result."

Kimi Raikkonen: "The team worked really hard to improve the balance of the car ahead of qualifying and that was enough to make a step forward. It's still not where we want to be, but we did our best and P13 is a good position to start the race. We'll see what is possible to achieve tomorrow: the race is never easy here but we will do all we can to bring home a good result."

Antonio Giovinazzi: "It was definitely the best session of the weekend so far for us, after struggling yesterday and this morning in FP3. The team did a great job and we made a big step forward from this morning: we put two cars in Q2 and we need to be happy with this result. P13 and P14 was probably the maximum we could, especially on a hot and windy day that made conditions quite tricky out there. Starting where we are, everything can happen in the race: the track is not an easy one on which to overtake but a good start and the strategy can put us in a good position. We expect tyre degradation to play a big role in the race, especially with this heat, so to make the right calls there will be key to have a good result."