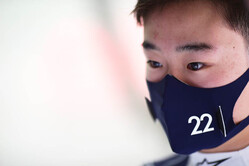 The AlphaTauri driver had just completed a fast lap and had communication from the team that he was now on an in lap.

However, the team did not warn car him of the approach of Bottas who was on a fast lap.

Bottas approached Tsunoda at the entry to Turn 4, where the Japanese was on the racing line, and while he attempted to move off the racing line to the outside he did impede the Mercedes unnecessarily.

The stewards deemed that it is the responsibility of every driver to be aware of faster cars when they are on a slow lap, and while the team should have assisted the driver in being aware of the approaching faster car such lack of communication is not an excuse for the driver.

Consequently Tsunoda was handed a three place penalty meaning he will start from eleventh. He was also handed one penalty point on his licence.