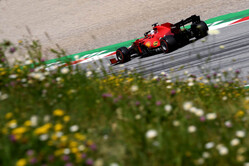 It was a very busy first day of free practice at the Styrian Grand Prix for Scuderia Ferrari. In both sessions, the team evaluated the different Pirelli compounds available for this event, checking their behaviour with various fuel loads. The team acquired a lot of data that will now be analysed over the next few hours to try and optimise car performance, especially over a single flying lap where there is still room for improvement. The situation over a long run seems more in line with that of the Scuderia's closest rivals. Today, the two SF21s completed the most number of laps across all teams, 147 in total, which is more than two race distances.

In the first hour of Friday practice, Charles and Carlos put in 69 laps – 36 and 33 respectively. They both did a lot of running on the Soft compound, but also tried the Mediums towards the end of the session. At the start of the hour they had evaluated the car with low fuel levels, setting their best and almost identical times of 1'06"629 for the Monegasque and 1'06"630 for the Spaniard.

In this afternoon's 60 minutes, Sainz and Leclerc made the most of the fact that, contrary to expectations, the track stayed dry and they were able to complete their programme. Again in this session the drivers only did a qualifying simulation at the start, setting their best times of 1'06"147 for Carlos and 1'06"270 for Charles.

The third and final free practice session starts at 12 CET tomorrow, in preparation for qualifying at 15. The Styrian Grand Prix gets underway on Sunday at the same time.

Carlos Sainz: It was an intense Friday. In the morning, we tried various set-ups to find the best direction to follow regarding the tyres. Our main aim in both of today's sessions was to understand the behaviour of the various compounds.

Tomorrow we will concentrate more on enhancing the car's performance on flying laps with the aim of qualifying well, but it will not be easy. Our race pace was not bad, but we are cautious and we will continue to analyse all the information and data gathered today.

Charles Leclerc: We learned a lot today, having tried many solutions. Our long run pace seems quite competitive compared to our closest rivals. Where we did struggle a bit was with our qualifying pace, which it is not usually the case, so we will have to concentrate on this tonight and tomorrow. It's hard to say if we have found the way to get the tyres to work at their best but we look in better shape when compared to the previous race. There's still a question mark over the weather, as it could rain and also be cooler and that could make the situation even more complicated.