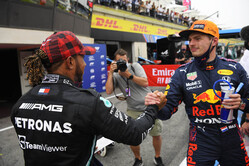 One can hardly begin to imagine the conversations that have been taking place at Mercedes since this morning's session, Toto Wolff's face like thunder as he carefully avoided the various microphones stuck in his face.

The 0.747s gap between Max Verstappen and Valtteri Bottas was bad enough, but with Lewis Hamilton 0.966s down on the Dutchman the German team is clearly on the back foot.

To add to the German team's woes, though Ferrari wasn't expecting to be on the pace this weekend, both drivers, particularly Carlos Sainz are looking strong.

Having missed the open goal that followed Verstappen's demise in Baku, Mercedes, and in particular Hamilton, is seeking to make amends this weekend, but despite the numerous technical directives that have been sent their way, Red Bull appears to be as strong as ever.

Once again, this morning saw drivers struggle to remain on track, a number taking a trip over the circuit's highly abrasive kerbs, while track limits were also an issue, with numerous drivers having their times deleted.

Assuming that Mercedes hasn't been sandbagging, this afternoon Hamilton and Bottas will be keen to remain as close to the opposition as possible, for an anticipated one-stopper tomorrow will leave them with few strategic options.

Understandably, there has been a lot of work on Hamilton's car over the break.

The lights go green and Giovinazzi leads teammate Raikkonen out, followed by Gasly and Tsunoda.

More and more drivers head out as Gasly is told to "focus on yourself", all sporting the red-banded softs.

The session is red-flagged just three minutes into the session, after Tsunoda spins at Turn 1 and clouts the barrier. The AlphaTauri leaves angry track marks on the run-off.

"No gear, no gear," he complains. As the team tries to guide him through the process, he climbs from the car.

The relay reveals some curious oscillations at the rear of the car as it travelled backwards over the run-off.

Ahead of the green light, Leclerc heads the queue at the end of the pitlane, with his teammate tucked in behind.

The session resumes with 14:00 remaining.

Hamilton questions the wisdom in sending him out with so many others cars, but he is told that there is a limit on time. Soon all 19 drivers are on track.

Gasly goes second, ahead of Norris, Stroll, Vettel and Ricciardo.

As Verstappen goes quickest, ahead of teammate Perez by 0.559s, Stroll has his time deleted.

Ahead of the final run, Stroll has yet to post a time. The Canadian, along with Tsunoda, currently comprises the drop zone, along with Mazepin, Raikkonen and Latifi, with Russell, Schumacher and Giovinazzi hovering.

PBs in the first two sectors are about to be followed by a third when the session is red-flagged again, this time after Schumacher goes off and hits the barriers at Turn 7.

On the pit-wall Otmar Szafnauer has his head in his hands as Stroll has missed the cut, unlike Schumacher who qualifies 14th but will play no further part in the session.

Raikkonen and Stroll will understandably feel particularly aggrieved by that red-flag stoppage.

As Q2 gets underway, a number of drivers are sporting mediums, the yellow-banded rubber last seen yesterday.

Of the bulk of drivers that initially head out, only Russell opts for softs.

Gasly goes quickest, ahead of Gasly and Leclerc, but a 31.306 sees Bottas go second.

They head out for the final assault, Verstappen among the last to leave his garage. Though they look set to stay put, Perez and Hamilton subsequently head out.

"We'll box this lap," Norris is told, "we'll explain later." The Briton, currently seventh, will be hoping that he's safe.

Perez and Ricciardo have switched to softs, as has Giovinazzi.

Leclerc also improves, but only to 9th.

Bottas goes quickest with a 30.735, while Ricciardo makes it by the skin of his teeth.

Gasly is warned of a headwind in Turn 11 which means a tailwind in 12.

The Frenchman leads the field as Q3 gets underway.

Gasly posts a 31.410 but his time is instantly deleted.

With 3:00 remaining they head out for the final assault, Hamilton among the last to show.

Yet to post a time, Gasly is first out.

As ever, in an attempt to find a space the field is backed right up.

"That was a good lap," echoes Hamilton.

All of which is looking a lot better for Hamilton than it did earlier, once again the Briton and his team digging deep.

"Really positive weekend," beams pole-man Verstappen in the post-session interview. "FP2 was a turnaround and just made it even better today.

"Of course we have to finish it off tomorrow, the car felt good yesterday in the race simulation so I'm looking forward to it."

"Really, really hard weekend," adds Hamilton. "Mentally, not physically... trying to get this car into a happy place, the changes I made to the car were satisfying.

"Max did a great job today, he's been incredibly quick, he's got a fresh engine this weekend so I've just got to give it everything."

"It's been a strong weekend, much better than a couple of weeks ago," says Bottas, taking a leaf out of countryman Kimi Raikkonen's book of brevity.