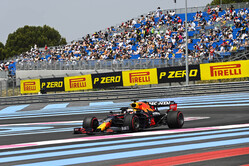 Red Bull's Max Verstappen set the pace during today's free practice for the French Grand Prix, followed by the two Mercedes of Valtteri Bottas and Lewis Hamilton. Bottas was fastest in the morning session, before Verstappen went even quicker in the afternoon. On both occasions, the P Zero Red soft tyre in C4 compound was used.

The teams used mainly the P Zero White hard compound and P Zero Red soft in the morning, with the P Zero Yellow medium used extensively in the first part of FP2, followed by the soft compound again as the teams focussed on qualifying simulations.

The track was reasonably 'green' and slippery in the morning, thanks also to some fresh asphalt on parts of the surface, but it rubbered in progressively during the course of the afternoon to provide good grip.

Weather conditions were dry and warm throughout the day, with FP2 getting underway in 31 degrees ambient and 49 degrees of asphalt temperature. Slightly cooler conditions are expected for qualifying, and there's a chance of even lower temperatures for the race, with the possibility of rain on Sunday morning.

Mario Isola: "Free practice went more or less as we expected it to. The FP2 time was slower than the equivalent session in 2019, mainly due to the stronger winds today, and partly because of some partial track resurfacing. We've seen that the medium and soft compounds are reasonably closely matched, which should bring them both into play for qualifying tomorrow and have a big effect on race strategy too. The teams were able to gather plenty of good data over the soft and medium compounds in particular with different fuel loads, while the hard was used less extensively and mainly in the morning. So it's going to be interesting to see how all that translates into strategy calculation and different approaches to qualifying tomorrow, which should again be run in warm and dry conditions here".