"Christian is a bit of a windbag," says Wolff 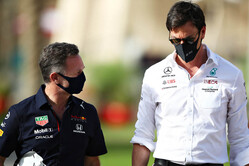 The war of words between Toto Wolff and Christian Horner takes a new twist as the Austrian calls the Red Bull boss a "windbag".

The expression, which refers to someone thought to speak at too great a length or to say little of value, often with an air of pretentious authority, dates back to the 15th century and is English in origin.

Consequently, how the little known (by modern standards) expression came to be part of Toto's vocabulary is a mystery, but part of it, it most definitely is.

On Friday, when asked about the ongoing row over bendy wings, Christian Horner told Sky Sports: "I think if I was Toto with the front wing he's got on his car, I'd keep my mouth shut.

"A lot of noise has been made about the rear wing, and a lot of revisions have had to be made," he added. "So if you're picking on one end of the car, you have to look at the other.

"You can't look at one part in isolation and say that set of rules only applies to that element on that car. You have to look at all areas. Sometimes, you have to be a little bit careful what you wish for."

"Christian is a bit of a windbag who wants to be on camera," responded the Austrian. "It's easy to be punchy when you're on the top of the times sheets but you should be a little bit more modest."

The verbal sniping appears to be regarded as silly even by their drivers, with Lewis Hamilton suggesting the pair should adopt the age-old practice of settling things in the boxing ring.

"Yeah, but I think the weight division is a bit of a problem," said Max Verstappen, "in the height, the reach..."

"They're the same weight, just difference in height," argued Hamilton.

"I'm all for a ring anyway, even in Formula 1," said the Dutchman, "instead of penalties!"