Norris struggling to master his McLaren 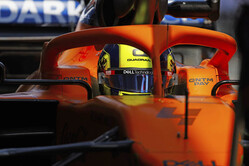 It's not only Daniel Ricciardo who is struggling with the MCL35M, for Lando Norris also admits to having issues with the car.

Currently third in the driver standings - ahead of Mercedes Valtteri Bottas - one would be forgiven for believing that Lando Norris is at one with the MCL35M.

Not a bit of it, speaking as the Azerbaijan weekend got underway, the Briton admits that, like his teammate, he is struggling to master the car.

While Norris claimed the final podium place in Monaco, teammate Ricciardo had the race from hell, finishing a lowly twelfth, lapped by his teammate, a first for the Australian since entering F1.

"I don't know if it we got it wrong, it just never really got going," Ricciardo told Sky Sports in the moments after the Monaco race. "We didn't really do a crazy different set-up, the cars, I want to say, were nearly identical from a set-up point of view.

However, Norris admits that there are aspects of the car that he too is struggling with.

"This year the car is different, and there are different things on the car that you have to drive in a different way," he told reporters. "I'm still learning a lot, with every race that we do, about the car.

"I would say Monaco was my best qualifying that I've done," he added, "but I made mistakes in previous qualifying and races because of not knowing about the car enough.

"I'm still learning a lot of things and, especially in Bahrain, for example, and in the first couple of races of the season, I was driving it too much like last year's car and I had to adapt a lot to this year's car.

"So there are definitely a lot of differences and it's not been easy-going from last year, the last two years, to this year. I can't just drive it the same way and then just be a better driver.

"I've had to adapt to a lot of different things, and I still can't necessarily drive it the way that I want to, as a preference from how I drove in Formula 3 and Formula 4 and things like that.

"I can't drive it the way that I want. So a bit of it is just you have to adapt, and every car in F1 is different and you have to get used to it."

Due to the nature of the track, Norris' former teammate, Carlos Sainz has tipped the Briton for further success this weekend. Norris isn't convinced.

"I think we can be confident and optimistic, we can go well," he said. "But I don’t think we’re going to be anything extraordinary or unexpected.

"We have a good car and we’ve shown that over the first five races of the season that we have a decent car in most of the tracks," he added. "But I don’t think we can be confident saying we’re going to be quicker than Mercedes or Red Bull.

"We’ll do our best to keep our heads down and try and get another result like last time."