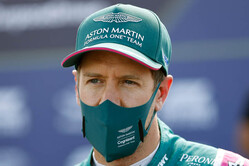 The sleek, high-rise backdrop of Baku contrasts with the twisty, technical street circuit that encircles an ancient, medieval city. A lap of the track is equally diverse - drivers tiptoe through the narrowest pincer-point on the whole F1 calendar, but spend more than two kilometres with their right foot planted hard on the accelerator pedal. Azerbaijan may be one of F1's newer circuits, but its myriad challenges give off the vibe of an old-school street track.

Lance: "Baku is a place of special memories for me, it's here that I scored my maiden podium in Formula One. It's a complex circuit as it combines flat-out sections with tight corners in the middle sector, making the margin for error minuscule. We are continually progressing with our AMR21 and intend on building on our momentum from Monaco."

Sebastian: "From Monaco, we travel to another street circuit, Baku - but it's a very different challenge. You can overtake in Baku, and tyre degradation is much more of a factor, so, while Saturday remains important, finding a good balance for the technical sectors and the high-speed sections, while performing a strong race strategy, will be key to a good result. We're coming here off the back of a good weekend in Monaco, and we want to maintain our momentum."

The Azerbaijan Grand Prix punishes mistakes and stirs up unpredictability, keeping the pitwall on its toes as it reacts to events. Our strategy engineers have analysed historic data and recent car performance to predict the key factors that could determine the result on Sunday, presented in partnership with our Title Partner Cognizant.

• Baku is an outlier for street circuits because track position isn't essential, especially compared to the likes of Singapore and Monaco. The 2019 race had the fourth-highest amount of overtakes that season - 57 completed after the first lap, 49 (86%) of which were boosted by DRS.

• Overtaking is comparable to easy-to-pass Austria and Bahrain, so pit strategy is about the optimum, rather than reactionary. It's roughly a 21-second time-loss in Baku, making it one of the quicker pit-visits on the calendar. Strategy is driven by tyre degradation, and Pirelli has brought its softest and least durable range in the C3, C4 and C5. Expect one-stop races, but with early pitstops to remove the Soft tyre in favour of a longer-lasting compound.

• The Safety Car has the potential to affect strategies because the likelihood of a mid-race interruption is high. The VSC has appeared in a quarter of all Azerbaijan Grands Prix, while the Safety Car has featured in 50%. Race interruptions could affect when a team pits or if it switches to a two-stopper in the hope of finding a fresh-tyre advantage.