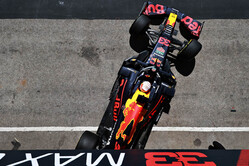 Despite Toto Wolff's threats to the contrary, Helmut Marko doesn't believe Mercedes will risk a "major scandal" in Baku by protesting as many as four teams.

Just in case anyone didn't get the message, Toto Wolff warned not once, but twice last weekend that it is Mercedes’ intention to protest those cars - particularly those of title rival Red Bull - running 'bendy' wings in Azerbaijan.

"We have seen in the past that complicated redesigns for teams had a delay," said Wolff last Thursday, referring to the fact that the FIA is not introducing its more stringent tests for wing flexibility until the French Grand Prix.

"It's clear that, if you have a back-to-back race, or maybe even two weeks, it's too short for everybody to adjust," he continued, "but we're having four weeks to Baku and it is incomprehensible that, within four weeks you can't stiffen-up a rear wing for the track that is probably the most affected by flexible rear wings.

"That leaves us in no-man's land," he added, "because the Technical Directive says the movement of some rear wings has been judged as excessive - so teams who would run these kinds of wings are prone to being protested and probably this is going to do to the ICA (International Court of Appeal) , and nobody needs this messy situation."

Three days later his mood hadn't softened, far from it.

However, title rival Red Bull isn't the only team allegedly running the so-called 'bendy' wings, for Ferrari, Alfa Romeo and Alpine are also believed to be bending - if you'll pardon the pun - the rules.

Consequently, Helmut Marko believes that Mercedes will not risk the "major scandal" of protesting four teams next weekend.

"Mercedes would have to protest against eight cars," he tells F1-Insider.com. "Because in addition to us, Ferrari, Alfa Romeo and Alpine are also impacted.

"Do you really want to do that and cause a major scandal? I do not think so.

"We expect that the tests for the front wing will now also be tightened," he added, "that's just fair. Because especially the front wing of Mercedes is the most wobbly candidate in this area. In any case, there is also potential for protest.

"We are changing our wing so it passes the new tests as required at the time required by the FIA,” he confirmed. "But that doesn’t work for Baku. We can’t do that in terms of time because we have to adjust the entire rear end. You can’t just build a new grand piano."