F1 will "take a look" at Monaco changes, says Brawn 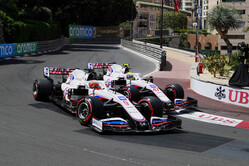 Following Sunday's processional race in the streets of the Principality, while insisting that F1 will look into the issue, Ross Brawn admits that he doesn't hold out much hope.

Whatever way you look at it, once Charles Leclerc was ruled out of Sunday's Grand Prix, that was it. Admittedly, the race did have the odd burst of excitement, such as Sebastian Vettel's drag race up the hill with Pierre Gasly - which the TV director managed to miss - but for the most part it was one of the most boring, processional events in living memory.

Indeed, aside from the various undercuts and overcuts, the only genuine overtake over the course of the 99 minutes was Mick Schumacher's move on teammate Nikita Mazepin at the hairpin.

Were it to have taken place in Skegness, Clacton-on-Sea or Rimini the event would have been dropped years ago, but this is Monaco, the 'jewel in F1's crown'.

The very nature of the Principality means that changes to the track layout, which has remained largely unaltered since the 1920s, are almost impossible, while the sheer size of the cars - not to mention the 'dirty air' issue - merely add to the conundrum.

While insisting that F1 will look into the issue, Ross Brawn admits that he doesn't hold out much hope.

"We'll take a look," he says, according to ESPN. "But it won't be the first time someone has taken a look at doing something like that, and no one has come up with a solution so far.

"But we do have tools now," he added. "We have built our overtaking simulation tool and we will certainly have our people take a look at it, but it's pretty challenging.

"People often say why don't you change the tyre strategy, or things like that, but the teams adapt. They just find tactics to overcome it, so I don't think tyres or strategy is going to make a lot of difference.

"We've got new cars next year, so it will be interesting to see what evolves with that. It's a brilliant event, but we all know the limitations of the track."

Warning: Purists should look away now.

On its recent visit to the Principality, Formula E, which used the same layout as F1, featured a so-called 'Attack Zone', an off the racing line area on the outside line at Casino Square that drivers had to use twice during the course of the race in order to gain a power boost.

Asked about the feasibility of F1 trying something similar, Brawn admitted: "You need to avoid the trickery, like having bits that you have to go on several times a race. There is some racing where you have to divert and go through an overtaking lane, I don't think we should do any of that type of thing."

Asked if the sport's 'jewel', was in fact rapidly becoming the motor sport equivalent of the King's new clothes, in that, despite the hype and glamour Monaco is no longer fit for purpose in terms i=of racing, Brawn was adamant: "No," he replied.

"The thing this demonstrates is how you can build a huge spectacle around the race. It's a great event, massive history, massive atmosphere and it's a race every driver wants to win.

"It's a different sort of racing and I don't think variety is a problem."