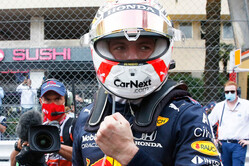 Following an emphatic win in the Principality, championship leader Max Verstappen insists that it's 'game on' for the title fight.

Valtteri Bottas' wheel nut nightmare aside, following the strategic own-goal with teammate Lewis Hamilton, Mercedes was set lose the lead in both championship for the first time in the hybrid era.

And while the war of words continues between Toto Wolff and Christian Horner - the Austrian suggesting that the forthcoming Grand Prix in Azerbaijan could see both teams protesting one another - Max Verstappen declares that, following a couple of false starts, it's game on for the championships.

"Actions always speak louder than words," declared the Dutchman, who got his post-race celebrations off to an early, enthusiastic start.

"I think that's a good lesson after this weekend," he added. "You know you have to talk on the track. That's what I like and yes, we, as a team, so far, made the smallest mistakes and that's why we are ahead. So I hope we can keep that going for the rest of the season.

"It's a bit of redemption for all the other races here because I never really had a lovely feeling on a Sunday here before," he admitted.

"It's a lot of laps around here and you really have to keep your focus," he admitted. "You never know what's going to happen, but it was all about looking after your tyres and finding a good pit stop gap. The others pitted earlier so that made it a bit easier for me. They started to struggle with tyres and all the time we could increase the gap. So of course I'm very pleased with that.

"It was pretty much in control," he insisted. "Of course it always looks under control, but to keep your focus for so many laps, that's the hardest bit. It's easy to relax a bit when you are in the lead and it's easy to make a mistake. You have to keep reminding yourself to stay focussed, keep your thoughts on the road.

"Pace-wise it was very controlled, because all the time if somebody tried to push me a little bit in terms of lap times, we could answer and make the gap bigger.

"An amazing race," he concluded. "It was a good, smooth weekend overall I think, and this is a great boost for the whole team going forward."

Asked about the fact that he is now leading the championship for the first time (ever), the youngster remained philosophical.

"If it's there at the end of the season that would be great because it's still a long way to go," he said. "Of course it's great to bounce back after the last two races where of course the gap got bigger, but we still have to work hard because we know that Mercedes on normal tracks are still the ones to beat.

"Mostly I'm thinking ahead. It's still a very long season and of course this is again a great way to continue."